AeroShot Caffeine Side Effects and Health Risks. No civilized society would give a club drug to kids as young as 12 years old. Right? Wrong, it seems, if the makers of the new AeroShot Pure Energy had their way.

Right now, the ‘inhalable’ caffeine products are only available in France and through the company’s website at US$2.99 per ‘inhaler.’ But these are expected to hit Boston and New York retail outlets this month, where they may be sold next to energy drinks.

That is, if the health regulators don’t heed the warnings of United States Senator Charles Schumer (Democrat, New York), who has attacked AeroShot as a potential health threat especially dangerous to teens and youngsters.

Schumer, who in the past has effectively crusaded against Four Loko [see Four Loko Side Effects] and other caffeinated alcoholic drinks as well as bath salts [see Dangerous Effects of Bath Salts], both of which have led to spates of emergency room visits and deaths, said AeroShot shouldn’t be sold in the U.S. until the Food and Drug Administration reviews the product.

Speaking in a news conference last December, the senator lambasted AeroShot, saying “This product is nothing more than a party enhancer, designed to give users the ability to drink until they drop.” It is also a product that “promotes dangerously excessive consumption of caffeine among youngsters and teens,” he said.

AeroShot “has never been tested for safety by the FDA, particularly among children and teens, and there are absolutely no controls on who can purchase it and how much they can ingest,” Schumer said. None of the product’s safety claims have been independently verified by regulators, he added.

The senator urged the FDA to review the safety and legality of AeroShot immediately and order the manufacturer to provide adequate evidence substantiating its health and safety claims, especially among children and young people between ages 12 and 20.

Areoshot delivers 100 milligrams of caffeine powder—the same amount of caffeine as a large cup of coffee or a little more than an espresso—in six to eight pumps of a lipstick-sized inhaler.

The calorie-free caffeine powder isn’t really inhaled, but squirted on the tongue with an aerosol device like the one used by some medicines, allowing caffeine to be is delivered more quickly than a cup of coffee. Apart from caffeine, other ingredients are natural sweeter Stevia, B vitamins B and lime flavor.

The unusual product was developed by Harvard University professor David Edwards who is an expert on ingestible food and a pioneer in aerosol insulin deliver and inhaled vaccines.

At first, the Cambridge, Massachusetts-based maker claimed AeroShot was safe for people as young as 12 years old, and marketed this as a party accessory. The caffeine ‘inhaler’ was also initially slated for release this month with no age restrictions on its sale.

But after the senator raised safety concerns in December, the company revised its website to include a pop-up welcome window that said AeroShot is safe but is not intended for children under 12.

But an AeroShot advertising campaign in Europe highlights drinking and partying among users of the product, leading to fears that it will be used like a party drug.

AeroShot “could be a dangerous health hazard when taken with alcohol or when kids ingest excessive amount of caffeine,” Schumer warned.

Doctors note that taking over 300mg of caffeine daily over a long period of time will overstimulate the nervous system and produce nervousness, a flushed face, muscle twitching, irregular rapid heartbeat (tacchycardia), and rambling thoughts and speech. AeroShot’s makers warn consumers not to exceed three ‘inhalers’ per day.

Aeroshot caffeine side effects: it harms the young ‘uns developing brains, hearts
Using caffeine to elevate mood and enhance performance is not a new concept, and a 2010 Cochrane review of multiple studies showed that caffeine boosted performance: it reduced the number of errors shift workers made and improved memory, reasoning, perception and attention.

Other studies suggest that frequent dosing with about 20mg of caffeine an hour is an efficient way to counter the effects of sleep deprivation and improve brain-processing speed.

But while caffeine enhances performance in adults, these effects are extremely variable, dose dependent, and most importantly, have not been studied thoroughly in children and adolescents, the American Academy of Pediatrics (AAP) cautions.

The AAP also discourages the non-medical use of caffeine in children and adults because of the potentially harmful developmental and addictive effects of caffeine.

Caffeine may adversely affect the developing neurologic and cardiovascular systems of teenagers, and AeroShot may worsen asthma, the AAP said in a letter to Aerosol’s maker.

The impact of inhaled caffeine on the lungs of children and teens has never been examined, the pediatricians also said. 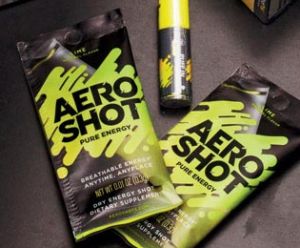 >> Post Related to Aeroshot caffeine side effects: Coffee Side Effects

Addicted to caffeine. Caffeine is probably the only psychotropic substance that is legal and popular but psychiatrists say it can be abused.

That caffeine is addictive is also widely accepted by the physicians and the research community.

Addiction may also be more easily promoted by products like AeroShot because while the taste is quite unpleasant, it “achieved exactly what it said it would: instant energy,” note Vivian Giang and Eric Goldschein, who reviewed the controversial product for Business Insider.

“Upon consumption, you’ll feel the caffeine within minutes and there’s no hassle or need to balance a cup of hot liquid while you’re running late to work. If the taste doesn’t matter much to you, AeroShot might be your newest go-to for a jolt of energy,” they write.

In today’s hyperefficient societies that demand uberproductivity, becoming addicted to a “productivity aid” is a danger that lurks.