In 2004 then U.S. Secretary of Health and Human Services Secretary Tommy Thompson launched a crackdown against companies selling bodybuilding products containing androstenedione or “andro” because of the health risks these products pose to its users.

Back then the ex-HHS Secretary had this to say about the dangers of andro: “Young people, athletes and other consumers should steer clear of andro because there are serious, substantial concern about its safety. Young people should understand that there are no short cuts to a stronger body and that the best way to get faster and stronger is through good diet, nutrition and exercise.”

Other government officials weighed-in on the bad negative effects of andro. Here’s John Walters, then Director of National Drug Control Policy: “Athletics benefit young people’s health and give them a lesson in the value of hard work. Androstenedione and other performance-enhancing drugs undercut these benefits by endangering our children’s healthy development and teaching them that cheating is an acceptable component of pursuing excellence.”

And here’s then Food and Drug Administration (FDA) Commissioner Mark McClelan’s take on the issue: “While andro products may seem to have short-term benefits, the science shows that these same properties create real and significant health risks. While the products are advertised to athletes, they have the potential to get into the hands of our impressionable youth who may believe these products will help their development.

“Anyone who takes these products in sufficient quantities to build muscle or improve performance is putting himself or herself at risk for serious long-term and potentially irreversible health consequences. There is no proven safe substitute for hard work and training when it comes to improving athletic skill; we will do all we can to protect Americans against companies that seek to profit by trying to convince consumers otherwise.” 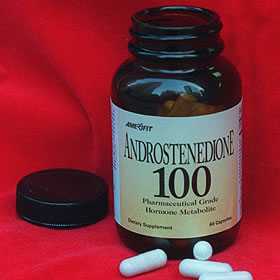 But what exactly are the bad andro side effects? Why are these public officials warning against its usage? Is their a basis for their concern or are the concerns overblown?

The most common and less common adverse health effects of andro include the following:

Recently, a Yale University study found that the use of muscle-building supplements with creatine or androstenedione is linked to a significantly higher rate of testicular cancer.

The study, published in the April 2015 issue of the British Medical Journal, is the first analytical epidemiological study to focus on the relationship between andro-containing supplements and testicular cancer.