Antidepressant Side Effects vs. Benefits: Do antidepressants work? Yes for some people and no for others — and right now, there’s a pressing need for scientists to determine who benefits and who doesn’t.

That’s the conclusion we came to after scouring the most recent analyses of studies done in the last decades, both published in the Archives of General Psychiatry. One study was led by a University of Chicago statistician and expert in psychometrics and published in the March 5 issue and the other was done by the Psychiatry department head of Yale University’s School of Medicine and reported last December.

The most recent meta-analysis on antidepressant side effects vs benefits, led by University of Chicago’s Dr. Robert Gibbons, looked at 37 studies that involved about 9,000 participants. In last December’s analysis, researchers led by Yale’s Dr. John Krystal used a new statistical approach to reanalyze data from seven clinical trials that were conducted to win the United States Food and Drug Administration’s approval for duloxetine, known by its brand name Cymbalta. Overall, the analysis covered 2,515 patients.

Both studies suggest that antidepressants may have some benefit across the board, and not just in people with severe depression. 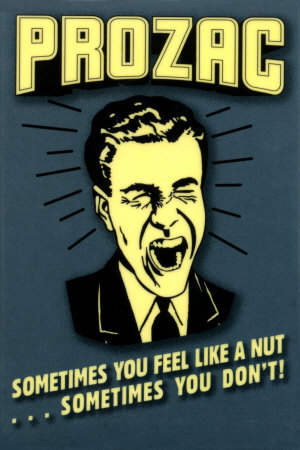 Dr. Gibbon’s team looked at selective serotonin reuptake inhibitors (SSRI), while the studies reanalyzed by Dr. Krystal investigated duloxetine, a serotonin and norepinephrine reuptake inhibitor (SNRI). Both drugs are the newest classes of antidepressants that were hailed as breakthrough drugs when they were first released on the market.

Looking at outcomes for each individual patient, the researchers found that — regardless of how severe those symptoms were to begin with — more patients taking either Prozac or Effexor experienced a substantial improvement in their symptoms than those taking a drug-free placebo pill.

Specifically, they found that:
• More participants (both adults and children) taking Prozac had at least a 50 percent improvement in scores on depression tests after six weeks compared to those who were given a placebo pill.
• In adults, 55 percent of adults on Prozac responded to treatment, compared to 34 percent in the placebo group.
• In youth, 30 percent on Prozac had significant symptom improvement, compared to just six percent of the comparisons.
• In the elderly, less than five percent on Prozac improved, and researchers calculated that 17 older patients would have to be treated with Prozac for one to gain from it.
• Both types of Effexor also seemed to help adults with mild to severe depression, with slightly more patients responding to the immediate-release dose.

On average, the analysis showed that about five people had to be treated with one of the drugs for one person to feel better.

When looked at closely, “the idea that unless you’re very, very ill, you’re not going to benefit from treatment doesn’t appear to stand,” says the study’s lead author, Dr. Gibbons.

He also tells Reuters Health, “Clearly the efficacy of antidepressants is age-dependent, (and) largest, most interestingly, in youth — which I don’t think would be the mainstream view in psychiatry.”

The findings, he adds, “raise other questions that need to be followed up (including), what’s going on in the elderly?”

What’s worse, the new findings only add to the confusion over antidepressants.

Today, about 11 percent of Americans are taking these medications for depression, according to 2011 figures from the Centers for Disease Control and Prevention.

Antidepressants are the second most prescribed type of drug in the U.S., data from IMS Health shows. Last year, 255 million prescriptions for antidepressants were dispensed in the U.S., a two percent increase from 2009 — but the real surge came between 1994 and 2008, when antidepressant use soared by almost 400 percent.

Today, out of five American women between 40 and 59 years old, one is taking an antidepressant, the highest rate for any group. Nearly four percent of adolescents (ages 12-17) are on an antidepressant.

In the 1990s, a few years after Prozac was first approved by the FDA, the drug was hailed for bringing about sparkling personality transformations in people who took it.

But an abrupt about-face came in the early 2000s, when studies showed that Prozac and other SSRIs were linked with suicide, especially in kids and teens. Another backlash occurred in 2008, when a meta-analysis found that the SSRIs were actually no more effective than placebos, except the most severe cases of depression. SNRIs have also been implicated with the same problems.

Growth-mixture modeling reveals treatment trajectories of patients rather than looking at outcomes on average. Thus, this statistical technique allows investigators to track more accurately how individual patients improve or worsen over time in response to a medication or a placebo.

Considering only the aggregate — like most research dies — obscures both the benefits and harms of a drug, because when some patients get better while another get worse, the drug’s true impact is “canceled out.” To some extent, this may help explain why some research found that antidepressants worked no better than a placebo, Dr. Krystal says.

Using the new technique, what Dr. Krystal’s team found was that roughly three-fourths of patients did better on medication than on a placebo.

“That’s much more than half and half. That’s quite favorable,” enthuses Krystal.

But Krystal points out: just under one-fourth of patients didn’t respond well to drug treatment — and in fact did get worse on antidepressants than patients who were given a placebo.

“This has enormous implications for understanding the limits of the effectiveness of our current medications,” says Krystal. “These data really caution against the demonization of antidepressants as merely placebo, but they do raise a concern that some people are better off on placebo than on the antidepressant that they’re getting.”

Those who don’t get better
This fact — that not everyone in the studies improved on antidepressants — is revealed in both meta-analyses.

Dr. Irving Kirsch points out that if five patients need to be treated with an antidepressant for one to improve substantially — most don’t get much out of it.

“More than 80 percent of patients aren’t getting a significant benefit from the drug — either they’re not getting better or they would get the same benefit with placebo,” he points out to Reuters Health. Dr. Kirsch is also a professor of psychology at the University of Hull in England and author of a 2008 meta-analysis in PLoS Medicine that found little benefit of antidepressants for most patients.

“There are alternative treatments for depression that also produce about the same symptom reduction as the drugs do — but without the risk of side effects,” Dr. Kirsch says. “Although placebo may not be a viable treatment option, there are other treatments that on average work as well as antidepressants, (such as) physical exercise and cognitive behavioral psychotherapy. As far as we know, these alternatives don’t make people worse.

“This suggests to me that antidepressants should be kept as a last resort, and if a person doesn’t respond to the treatment within a few weeks, it should be discontinued,” he says.

“While many people may benefit from antidepressant treatment (although most of them to a degree that isn’t clinically significant), about 1 in 4 are made worse,” he warns. “What makes this particularly problematic is the fact that we don’t know who these people are,” Dr. Kirsch adds.

So what’s the final verdict
WE may never know until genetic or some other test can detect accurately which individuals respond to antidepressants and which people don’t.

Prozac has a number of side effects, ranging from mild to serious.

Antidepressant Side Effects vs Benefits: Does it Really Work? posted 16 March 2012. Latest update on 11 April 2015.