Artificial Sweetener Side Effects: On a diet? Here’s surprising news for you. Don’t use artificial sweeteners. These can make you fat. Contrary to previous claims — and despite the fact that they have fewer calories than real sugar, if any — artificial sweeteners don’t help you lose weight. And new evidence shows that they can even encourage weight gain.

This was the conclusion of Dr. David S. Ludwig of the Children’s Hospital Boston in his Ask a Doctor article published in the December 2011 issue of the Harvard Health Letter, a Harvard Medical School publication.

Dr. Ludwig’s conclusion was based on recent research that found that the artificial sweeteners approved by the Food and Drug Administration—acesulfame, aspartame, neotame, saccharin, sucralose or stevia—promoted an habitual craving for carbohydrates because their extreme sweetness desensitizes people to the sweet taste.

It was also based on additional research that shows the existence of ‘sweetness receptors’ in fat tissue, leading to the possibility of artificial sweeteners directly stimulate the development of fat cells. 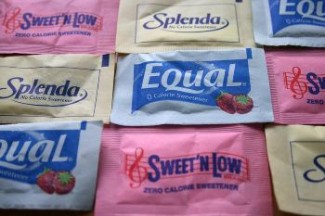 To confirm and follow up these findings, Dr. Ludwig’s team at the Children’s Hospital Boston is conducting a one-year clinical trial that he says “should help resolve questions about the relationship of artificial sweeteners to weight gain (or loss) and other health outcomes.

At the end of the year, study team will examine changes in body weight and heart disease risk factors.

Dr. Ludwig is calling on young adults who are interested in participating in the study, sponsored by the National Institutes of Health. Those who wish to join the study can call 617-355-2500.

More on artificial sweetener side effects after the jump.