Benicar Side Effects. What are the side effects of the high blood pressure drug olmesartan (trade names: Benicar in the US, Olmetec in EU and Canada, WinBP and Golme in India, and Erastapex in Egypt)? The National Library of Medicine lists dizziness, swelling, hoarseness, and breathing/swallowing difficulty as the most common side effects.

However, a new study by Mayo Clinic gastroenterologist Dr. Joseph Murray found that some patients who took the drug reported gastrointestinal disorders such as diarrhea, vomiting, severe nausea, and weight loss which are symptoms of celiac disease. These disorders reportedly disappeared when the patients stopped taking in olmesartan.

From the Mayo Clinic media release on Benicar side effects:

From 2008-11 Mayo Clinic physicians treated 22 patients with symptoms similar to celiac disease, including intestinal inflammation and abnormalities. Patients came from 17 states and some had been diagnosed with celiac disease. They had chronic diarrhea and weight loss; the median weight loss was 39 pounds, and one patient lost 125 pounds. Fourteen of the 22 were hospitalized because of the severity of their symptoms. When given a blood test, however, these patients didn’t come back with results typical of celiac disease. They also didn’t respond to treatments such as gluten-free diets.

After examining their medications, Mayo Clinic gastroenterologist Joseph Murray, M.D., pulled several of the patients off Olmesartan. Their symptoms dramatically improved. Eventually, all 22 were taken off the drug, and all showed improvement. Eighteen of the 22 patients had intestinal biopsies after stopping the medication and showed improvement.

It is worth pointing out that this study only found an association between Benicar use and the above gastrointestinal disorders. In other words, the researchers are not saying that there is a causal relationship between Benicar and diarrhea, vomiting, severe nausea, and weight loss or that the drug causes said conditions.

Says Dr. Murray: “It’s really an awareness issue. We want doctors to be aware of this issue, so if they see a patient who is having this type of syndrome — that they think about medications as a possible association. We’ve reported an association. What needs to be known next is the science to understand why there is such an association.”

In the embedded video below, the study author suggests that the association is probably very rare and that the vast majority of patients taking in Benicar should not change it at all. Here’s the video of Dr. Murray talking about their study and its implications:

What’s the medical community saying about the Mayo Clinic findings? Here are some reactions we culled from news reports:

Dr. Franz Messerli, director of the hypertension program at St. Luke’s-Roosevelt Hospital in New York (via ABC News): He said that just because the side effects stopped when patients stopped taking the drug doesn’t necessarily mean that the drug caused those side effects. “Only re-exposure [to the drug] can confirm that the GI side effects were indeed due to olmesartan,” he said.

Dr. Henry Black, clinical professor of cardiology at NYU-Langone Medical Center (via ABC News): “I use this agent all the time with excellent results with respect to blood pressure lowering. I find it very difficult to believe that this very small sample of individuals means anything.” Black said it’s more important to know whether other drugs in the ARB family have produced similar side effects. 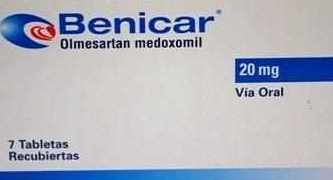 Dr. Domenic Sica, professor of medicine and pharmacology at Virginia Commonwealth University Health System (via MedPage Today): “This report would suggest a drug allergy of sorts and findings that would not relate to the mechanism of action of this drug in that no such reports have even arisen with the several other drugs in this class. Olmesartan has been on the market for several years and these results are surprising this far out into its life cycle. Nonetheless, the findings send a powerful message suggesting the need for a critical look at what the FDA and other drug regulatory agencies around the world have in hand that might suggest prior similar occurrences with olmesartan or, for that matter, any of the drugs in this class.”

Franz Messerli, director of the hypertension program at St. Luke’s-Roosevelt Hospital in New York City, issued the following statement on the Mayo study on Benicar side effects (via Forbes Magazine):

Several issues should be scrutinized in this context:

1. Were any of the patients re-exposed to olmesartan and did the symptoms recur? Mere cessation of a drug and vanishing of a symptom is not an acceptable criterion for confirming a cause and effect relationship. Only systematic (and not anecdotal) re-exposure can confirm that the GI side effects were indeed due to olmesartan.

2. Has there been any other ARB indicted for the same issue or are the findings unique to olmesartan. Is this a class effect or is it specific to olmesartan?

3. Was this syndrome ever seen in the extensive data base with olmesartan or with any other ARB? There are numerous clinical trials with olmesartan and GI adverse effects are exceedingly uncommon.

4. And most importantly, what is the putative pathophysiologic mechanism? In this context the possibility of intestinal angioedema comes to mind which has been observed occasionally with ACE inhibitors but to my knowledge not with ARBs. If it were olmesartans’s inhibitory effects on transforming growth factor B action as the authors suggest, then this phenomenon should have been observed with other ARBs such as losartan and valsartan (which are more commonly prescribed than olmesartan) as well.

The company that manufactures Benicar, Daiichi Sankyo, is reportedly reviewing Dr. Murray’s study but maintains that its 2009 study found “that a causal relationship between exposure to olmesartan and celiac disease is very unlikely.”