Chantix Side Effects: Depression and Cardiovascular Problems? Chantix, the anti-smoking pill once heralded as a blockbuster drug and a major breakthrough in the science of helping smokers butt out, has been racking up a bad reputation for being linked to psychiatric problems and heart problems.

In a recent study, U.S. researchers said the popular smoking-cessation medication, made by drug maker Pfizer and sold as Champix in Canada, Europe and other countries, was linked to suicidal thoughts and aggression.

The new study, published in the journal PLoS One in November 2011, reviewed 3,249 case reports of smokers who experienced depressive symptoms while using medications to help them butt out.

“We found that Chantix is associated with more suicidal reports than any other smoking-cessation drug on the U.S. market,” said study co-author Curt Furberg of Wake Forest Baptist Medical Center in Winston-Salem N.C. “The risks simply outweigh the benefits.”

Another study published by the Canadian Medical Association Journal [via The Globe and Mail] last June found that people who took Chantix to help them stop smoking may have an increased risk for cardiovascular problems.

The new studies only highlight growing doubts over the safety of the drug, also known by its generic name varenicline tartrate.

The drug has been the subject of probes by both the United States Food and Drug Administration and Health Canada, for being linked to both psychiatric and heart problems.

Since Chantix was first released in markets in 2007, Health Canada has issued several public advisories warning consumers about the side effects of the anti-smoking drug. From 2007 to 2011, the U.S. FDA has issued 13 safety warnings on Chantix.

Health Canada received more than 1,200 reports of adverse reactions associated with Champix since it came on the market in Canada in April 2007, the Globe and Mail reported.

And since 2008, Health Canada has issued several warnings, telling patients and health-care professionals that varenicline may be linked to depression, agitation, aggression, hostility and thoughts of self-harm. Alcohol intake could increase the risk to patients, Health Canada warned.

In both North American countries, the drug must now carry a boxed warning, the highest warning both public health agencies reserve for drugs that have been linked to serious safety issues or adverse events.

Both health authorities say numerous patients taking Chanpix experienced serious neuropsychiatric symptoms—depressed mood, agitation, aggression, hostility and thoughts of self-harm or suicide—even when they had no history of psychiatric disorders.

In the warnings, Health Canada and the U.S. FDA also highlighted reports of dizziness, loss of consciousness, seizures and other serious side effects linked to the drug.

Some patients using Chanpix have also experienced serious skin reactions, including angioedema, characterized by swelling under the skin that can be fatal, and other severe skin reactions, the warnings said.

The warnings also included more comprehensive information for health professionals and patients about taking the drug and monitoring for potential problems. It also includes an option for patients to take a lower dosage of the medication instead of moving to a higher dose, as was traditionally recommended.

But public health officials have also cautioned that it was always difficult to tease out whether a drug was the direct cause of a side effect among all the factors at play. 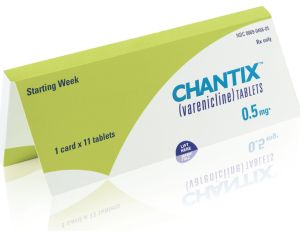 Chantix side effects: maybe just smokers depression? And the depressions suffered by the ex-smokers taking Chantix may only be part of withdrawal symptoms, some doctors say.

In fact, Pierre Martineau, director of medical affairs of cardiovascular and metabolic at Pfizer Canada, told the Globe and Mail that some of the problems reported to health officials may simply be brought on when people try to quit smoking. “We take the safety of all our medicines very seriously,” he said

“Nicotine withdrawal symptoms are something that can cause neuropsychiatric adverse events,” he pointed in an interview.

It reduces nicotine cravings and withdrawal symptoms by stimulating nicotine-craving receptors in the brain—instead of blocking nicotine receptors—but more weakly than nicotine does.

The drug was at first hailed as a hit when a number of studies—even those not funded by its manufacturer, Pfizer—showed it was more effective than NRTs and nicotine agonists. Worldwide sales of the drug last year were $755-million.

In a 2006, randomized controlled trial sponsored by Pfizer, more smokers who took Chantix to kick their habit were able to stay away from cigarettes for a year compared to those who took other smoking cessation aids: 23 percent of those who took varenicline remained cigarette-free, while only 15 percent of those on bupropion were smoke-free and 10 percent for those on a placebo.

Worldwide sales of the drug last year were $755-million.

Research published in the Canadian Medical Association Journal on July 4, 2011, showed that people who took varenicline were more likely to experience “serious adverse cardiovascular events” like irregular heartbeat, heart attack or stroke, than people who took a placebo.

A month earlier, the U.S. FDA had issued a warning that the drug may be linked to a “small, increased risk” of cardiovascular side effects in people who already have cardiovascular disease and ordered Pfizer to put a new warning on the drug’s label to reflect the risks, conduct a safety evaluation and a large study to determine the significance of the heart risks.

The agency’s decision was made after it reviewed a clinical trial of 700 smokers with cardiovascular disease and found that cardiovascular risks to patients taking Champix was two percent, compared with one percent for individuals not taking the drug, according to a Globe and Mail report.

Prompted by the FDA’s announcement, Health Canada said it will also investigate Champix and its potential links to heart problems.

In the new study, Dr. Singh and his colleagues at the Johns Hopkins University School of Medicine reviewed data from 14 clinical trials and found that patients taking Champix faced a 72 percent increased risk of adverse heart-related events.

“This is just like driving a car without brakes,” Dr. Singh told the Globe and Mail, noting that the findings highlight the potential dangers many patients face if they take the drug.

In its website, Health Canada notes that heart-related side effects have occurred “rarely” in clinical trials studying Champix and said this is included in the drug’s prescribing information. Pfizer has said cases of heart problems linked to its anti-smoking drug were not numerous enough to be significant.

But according to a Globe and Mail report, Dr. Singh believes the heart risks are being underplayed and that public health regulators have an obligation to warn patients and take action. “The regulators need to take responsibility for this issue,” he said.

Outweigh the benefits?. The new studies also fuels the debate over whether the drug’s benefits outweigh its risks.

For sure, varenicline has a checkered history of being flagged by regulators around the world for psychiatric side effects and serious, adverse heart problems.

But smoking also represents one of the biggest threats to public health.

Around the world, ten people die every second, and one among them dies because of tobacco use, the World Health Organization says.

Smoking and other forms of tobacco use kills nearly six million people a year: five million of this are smokers and ex-smokers while more than 600, 000 are nonsmokers exposed to second-hand smoke.

WHO says: “The tobacco epidemic is one of the biggest public health threats the world has ever faced.”

Pfizer has long claimed that Champix has been a useful aid to many patients and many health experts share that view.

Some research has also suggested Varenicline may not be the cause of behavior changes or suicidal thoughts in patients.

An study published in the British Medical Journal in October 2009 found no definitive link between the drug and side effects, such as depression or mood changes.

In the study, which involved more than 80,000 smokers, University of Bristol researchers found no strong scientific evidence that the drug increases the risk of blue moods or self-harm, compared with other aids for kicking the tobacco habit.

“Any such risk must be balanced against the likely long term health benefits of smoking cessation and the robust evidence of the effectiveness of varenicline as an aid to smoking cessation,” the authors said in their study.

But researchers cautioned that a more definitive conclusion could only be reached after a much larger study.

“Our study does not rule out the link between varenicline and suicidal behavior; more studies are required, but it does provide some reassurance,” the lead researcher David Gunnell told the Globe and Mail.

The study was criticized and the research community questioned its methodology, but the authors have stood by their findings, underscoring the controversial nature of the debate and lack of consensus over the prevalence of safety risks involving Champix, Globe and Mail reported.

Meanwhile, health regulators say consumers have a right to be aware of the possibility of serious psychiatric and cardiovascular side effects.

These Chantix side effects are notably also linked to clinical depression.

Some rare but mild Chantix side effects are: change in taste or bad taste in the mouth, constipation, gas or flatulence, vomiting, heartburn and abdominal pain

Serious Chantix side effects that need medical attention ASAP. If you are taking the drug and experience any of the following symptoms, stop taking it and get medical help immediately: