Cymbalta Side Effects. Cymbalta (duloxetine hydrochloride), a drug used to treat depressive disorder, can also be used to treat chronic musculoskeletal pain including discomfort from osteoarthritis and chronic lower back pain.

The U.S. Food and Drug Administration cleared the drug following clinical trials which proved its effectiveness against chronic pain.

Says Janet Woodcock (MD) director of FDA’s Center for Drug Evaluation and Research: “Up to three quarters of the population experience chronic pain at some time in their lives. This approval means that many of those people now have another treatment option.”

More from the FDA news release:
More than 29,000 patients have used Cymbalta in clinical trials, and more than 600 patients were studied in the clinical trials involving osteoarthritis and chronic low back pain.

The safety evaluation for Cymbalta included review of data from the clinical trials as well as post-marketing data from the previously approved patient populations.

The FDA assessed the efficacy of Cymbalta in chronic low back pain and osteoarthritis in four double-blind, placebo-controlled, randomized clinical trials. At the end of the study period, patients taking Cymbalta had a significantly greater pain reduction compared with placebo. 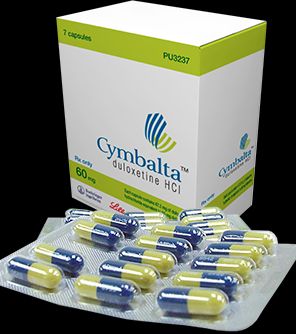 As for Cymbalta side effects, the FDA lists the following as the drug’s most common adverse effects: nausea, dry mouth, insomnia, drowsiness, constipation, fatigue, and dizziness.

Serious side effects, which occurred in less than one percent of patients, include: liver damage, allergic reactions such as hives, rashes and/or swelling of the face, pneumonia, depressed mood, suicide, suicidal thoughts and behavior.

According to the FDA, recommended dose for Cymbalta is “a 60 milligram capsule taken once daily without regard to meals. The capsule should be swallowed whole, and not chewed, crushed or opened; the contents should never be sprinkled on food or mixed with liquids.”