Deodorant Side Effects. Can deodorants cause breast cancer? Yes? No? Maybe? Many breast cancers develop in the part of the breast closest to the armpit, where underarm products are used and new research shows that parabens, a compound in antiperspirants, are found in many breast tumors.

But because they’re present in both the tissues of women who used deodorants and those who didn’t, health experts say the new findings are not conclusive and only raise more questions.

Parabens, a preservative found in deodorants, antiperspirants and other underarm products can act like the hormone estrogen. That lifelong exposure to estrogen may cause breast cancer is a well-established association backed up by enough scientific evidence.

Researchers have thus set out, in the last 10 years, to discover if lifelong exposure to parabens might have a similar effect. Many studies have been undertaken to test for such a connection.

In the new study, researchers from the United Kingdom’s University Hospital of South Manchester collected human breast tissue from 40 mastectomies performed in the U.K. for primary breast cancer on women between 2005 and 2008. The study’s findings appear in the Journal of Applied Toxicology.

Researchers measured the concentrations of five parabens at four locations across the human breast, including the armpit region. Measurements were made using high performance liquid chromatography-mass spectrometry/mass spectrometry.

The study team found that 99 percent of tissue samples had evidence of at least one paraben, and 60 percent showed evidence of five. Paraben levels did not seem to play a role in the cancer’s location or whether or not the cancer was fueled by estrogen.

But parabens were also found in the breast tissue samples of women who did not use any underarm products.

“The intriguing discovery that parabens are present even in women who have never used underarm products raises the question: where have these chemicals come from?” Dr. Lester Barr, lead author of the study, told reporters.

That question’s a subject for further study, she said. Dr. Barr is the South Manchester University Hospital’s consultant surgeon specializing in the treatment of breast cancer and breast reconstruction. She also head’s the university’s Genesis Breast Cancer Prevention Appeal, which part-sponsored the study. 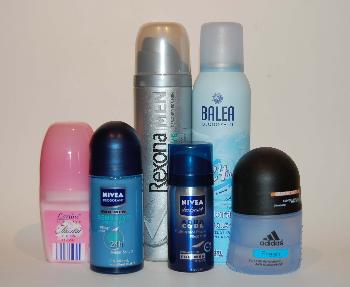 Commenting on the study, Dr. Philippa Darbre of the U.K.’s University of Reading says: “The fact that parabens were present in so many breast tissue samples does justify further investigation.” Dr. Darbe led the team that did a similar study in 2004, the first one that found traces of parabens in 20 different human breast tumors that were tested.

‘Better safe than sorry’
But the founder and president of Breastcancer.org says she does not believe in taking chances with breast health.

“Better safe than sorry,” Dr. Marisa Weiss tells WebMD. A breast cancer survivor, she is also the director of the Breast Radiation Oncology and Breast Health Outreach at the Lankenau Medical Center in Wynnewood, Pennsylvania.

“Our tissues can be storage lockers for chemicals like parabens,” she says. “There are parabens in many personal care products that can be taken into the body in different ways and can stay in you.”

She advises women to “avoid products that contain hormonally active ingredients including parabens,” “I only use cosmetics that are good enough to eat,” she says.

“We know that parabens are estrogen mimickers and so we continue to be concerned about our exposure to these chemicals through consumer products like cosmetics,” says Dr. Sharima Rasanayagam, director of science for the Breast Cancer Fund, a San Francisco, California-based advocacy group that focuses on environmental links to breast cancer.

“This study provides another piece in the puzzle around parabens and their potential link to breast cancer,” she tells WebMD.

Findings from an earlier study, done in 2003 by Dr. Kris G. McGrath of the Saint Joseph Hospital-Resurrection Health Care’s Department of Medicine in Chicago found that among women who got breast cancer, those who had used underarm products earlier in their life and shaved their underarms more frequently were diagnosed with cancer at an earlier age. The study, which probed the underarm hygiene practices among 437 breast cancer survivors, was published in the European Journal of Cancer.

Without further studies on breast cancer as one of deodorant side effects, the findings are uncertain
While many studies suggest that the use of antiperspirants or deodorants may be related to breast cancer, these do not demonstrate a conclusive link between the two factors.

And as for the latest study, just because parabens were found in breast tumors didn’t mean that they triggered the cancer.

“It’s possible that people without cancer might be equally exposed to the chemicals, so that (the paraben levels) in tissue are no higher among women with cancer than among those who are cancer-free. But there’s no way to tell because the study didn’t include an analysis of breast tissue from women without cancer, noted health writer Laura Blue in a TIME Healthland article, Do Antiperspirants Cause Breast Cancer?

“Although environmental exposure to parabens as a cause of breast cancer is a possibility, there is no conclusive data thus far to state this as fact,” echoes Dr. Katherine B. Lee, breast specialist at the Cleveland Clinic Breast Center in Ohio. “The study suggests that if there is a relationship between parabens and breast cancer, it may be a complex one.”

Scientists at the United States National Cancer Institute (NCI) also say they are not aware of any conclusive evidence linking underarm antiperspirant or deodorant use with breast cancer.

The U.S. Food and Drug Administration (FDA), which regulates food, medicines and medical devices—and to some degree, cosmetics—does not have any evidence or research data showing that ingredients in underarm antiperspirants or deodorants cause cancer.

“Further studies need to be performed to determine if there is a relationship between parabens and breast cancer, but if one is concerned, there are natural products without parabens that could be used,” is the FDA advice to women.

The FDA rates the risk of parabens as low and offers consumers a summary of all recent research on parabens and health.

“FDA is aware that estrogenic activity in the body is associated with certain forms of breast cancer. Although parabens can act similarly to estrogen, they have been shown to have much less estrogenic activity than the body’s naturally occurring estrogen. For example, a 1998 study (Routledge et al., in Toxicology and Applied Pharmacology) found that the most potent paraben tested in the study, butylparaben, showed from 10,000- to 100,000-fold less activity than naturally occurring estradiol (a form of estrogen). Further, parabens are used at very low levels in cosmetics.”

Overall, the FDA says that currently “there is no reason for consumers to be concerned about the use of cosmetics containing parabens.”

The American Cancer Society also says there isn’t reason to worry about antiperspirants just yet. “There are no strong epidemiologic studies in medical literature that link breast cancer risk and antiperspirant use, and very little scientific evidence to support this claim,” the group notes on its website.

The Safety and Regulatory Toxicology for the Personal Care Products Council, a Washington D.C.-based trade group representing the global cosmetic and personal care products industry also claims that most major brands of deodorants and antiperspirants no longer contain parabens.

You’re a woman and don’t want to take chances with your health? Choose hygiene products that don’t have parabens, health experts advise.

To find out if your deodorant contains parabens, check out the National Library of Medicine’s Household Products Database 1 that has information about ingredients used in most major brands of deodorants and antiperspirants.

Deodorant Side Effects: Are Deodorant and Anti-Perspirant Users at Risk of Breast Cancer? posted 17 January 2012. Latest update on 12 April 2015.