Apparently, there is a market for products that increase the volume of a man’s semen. One of these is Goliath Labs’ Ejaculoid which promises to do the following:

Ejaculoid Side Effects. Does Ejaculoid XXTREME work as advertised? Well, we doubt it. Back in 2006, the U.S. Food and Drugs Administration warned Goliath Labs against making unsubstantiated claims for this particular product. The regulatory agency stated that Goliath Labs’ claims that Ejaculoid is “Guaranteed to Increase Semen Volume…” and that it can “Boost your fertility and confidence – Increased sperm motility….” are not supported by reliable scientific evidence and, consequently, the claims are false and misleading. 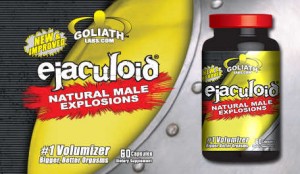 Are ejaculoids safe? Maybe not. In 2010, the FDA ordered the recall of ejaculoid XXTREME (marketed by Nutraloid Labs & manufactured by Goliath Labs) following the discovery that it contains undeclared chemical compounds similar to sildenafil. This ingredient, sulfoaildenafil, is not listed in the product label and has not been approved by the FDA.

Says the FDA in announcing the recall:

FDA notified consumers that lab analysis of lots of ejaculoid XXTREME and stimuloid II found that the products, sold as dietary supplements, contain sulfoaildenafil, similar to sildenafil, which is an active ingredient of an FDA-approved drug for male erectile dysfunction, making these products unapproved drugs. This active drug ingredient is not listed on the product labels and may interact with nitrates found in drugs such as nitroglycerin and may lower blood pressure to dangerous levels. Consumers with diabetes, high blood pressure, high cholesterol, or heart disease often take nitrates.

For those of you who are asking about the ingredients of Ejaculoid, here’s the product label. 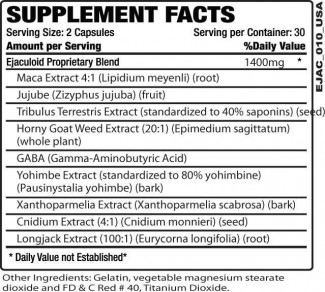 There’s no sulfoaildenafil listed in there so either the company removed it from their “dietary supplement” in which case it won’t help you harden up or the company is ignoring the warnings of the FDA.