Homeopathic Teething Tablets Safe or Not? Are the homeopathic teething tablets being sold on CVS, Hyland’s, and other stores safe? Do they really work? What are its side effects? Should you buy one for your baby?

Our two friends had an argument over this matter. Thankfully, they are mature about it and are still friends despite the kinda testy disagreement.

Because they don’t like us to mention their names, let’s call our first friend Marie and the second one Elena. Marie is a young mom who really cares about her baby and wants everything good for his development. Elena, meanwhile, is an older mom whose two kids are now in elementary (Grade 6) and high school. 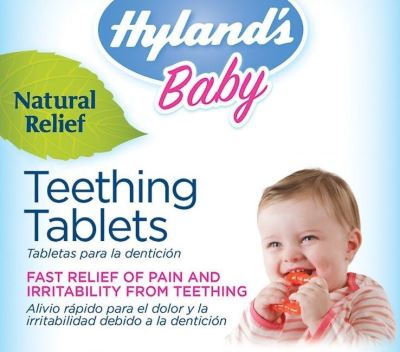 Two months ago, Marie bought homeopathic teething tablets for his son because he is teething. When Elena saw Marie give a tablet to the boy, she discouraged the new mom from doing so and announced that she “didn’t have to use no homeopathic teething tablets or gels for her own kids”. Like every mother would, Marie got offended and kinda shot back saying things she did not mean to say.

The two asked me what I think about the matter and, because I still have no child yet, I told them — at that time — that I have no clue and don’t they dare put me in the middle of their argument. Haha. Don’t worry, the three of us are cool as ever.

However, the Food and Drug Administration has recently released a statement on the safety of homeopathic teething tablets. Here’s part of what the agency says:

The U.S. Food and Drug Administration is warning consumers that homeopathic teething tablets and gels may pose a risk to infants and children. The FDA recommends that consumers stop using these products and dispose of any in their possession.

So, sorry Marie. We now are gonna side with Elena on this one. Thankfully for the three of us, this is now water under the bridge since baby Tom is no longer teething.

Homeopathic Teething Tablets Safe? Here’s what the FDA says about that:

More on Homeopathic Teething Tablets Safe or Not after the jump.

But haven’t these teething products been approved by the FDA? The Hyland’s website seem to indicate that this is the case but it may actually be misleading the public. Here’s what Hyland’s says:

First and foremost, the quality of homeopathic medicines manufacturing is regulated by the Food and Drug Administration (FDA), as required in the Federal Food, Drug and Cosmetic Act. The production of Hyland’s homeopathic medicines occurs within a validated process, as with any FDA-regulated drug, to ensure an accepted level of consistency in product output.

Do note, that there is nothing in the above that categorically states that Hyland’s homeopathic teething tablets has passed FDA requirements. In fact, this is what the agency reveals in its recent statement:

Homeopathic teething tablets and gels have not been evaluated or approved by the FDA for safety or efficacy. The agency is also not aware of any proven health benefit of the products, which are labeled to relieve teething symptoms in children.

The FDA is analyzing adverse events reported to the agency regarding homeopathic teething tablets and gels, including seizures in infants and children who were given these products, since a 2010 safety alert about homeopathic teething tablets. The FDA is currently investigating this issue, including testing product samples. The agency will continue to communicate with the public as more information is available.

Hmmm. How long does it take the FDA to investigate? So it issued a safety alert in 2010, and six years later, it still has not finished its investigation. What gives?

Let’s end this post with this comment from FDA Director for Drug Evaluation and Research Janet Woodcock: “Teething can be managed without prescription or over-the-counter remedies. We recommend parents and caregivers not give homeopathic teething tablets and gels to children and seek advice from their health care professional for safe alternatives.”