HRT Side Effects and Benefits: Does hormone replacement therapy (HRT) help women? Beyond treating menopausal symptoms, does it harm women? The results from research over the past 20 years has been conflicting — and a new analysis of a longitudinal study shows that women who used estrogen alone as HRT for about six years had a lower risk of developing breast cancer up to five years after they stopped taking it.

The analysis, reported in the March 7 issue of journal Lancet Oncology, adds another complication to the still-evolving story on the effects of using hormone replacement therapy.

Hot flashes, night sweats, mood swings and poor sleep quality are some of the distressing symptoms of menopause and doctors have long prescribed hormones to women to relieve these. For some time, the pills were also thought to be good for bones and the heart, and to have other health benefits. 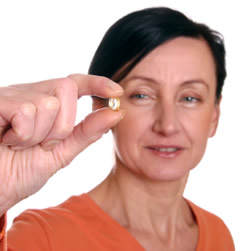 The new report is a follow-up analysis of the landmark Women’s Health Initiative, a clinical trial of tens of thousands of women begun in 1993. The trial sought to shed light on the risks and benefits of two HRT regimens commonly used in postmenopausal women: estrogen plus progestin given to most women and estrogen alone, usually taken by women who have had hysterectomies.

But in 2002, the estrogen plus progestin arm of the study was stopped abruptly when researchers found that the double-hormone raised the risk of breast cancer even while it didn’t confer hoped-for benefits against heart disease. In 2004, the estrogen-alone arm of the study was also halted a year ahead of plan, after an increased risk of stroke and blood clots was discovered.

“This study points out that it’s much more complex than we originally thought: Estrogen alone for the period we studied seems to be pretty safe and maybe even beneficial,” says Dr. Rowan Chlebowski, an investigator at the Los Angeles Biomedical Research Institute in Torrance and a coauthor of the study.

But Dr. Chlebowski admits that, “It goes against a huge number of observational studies suggesting estrogen would increase the risk of breast cancer by itself.” He’s chief of medical oncology and hematology at Harbor-UCLA Medical Center.

In findings that seem counterintuitive, the new analysis provides the strongest evidence so far that estrogen, taken alone, lowers the risk for breast cancer risk for a sustained period (by about 23 percent). Even better, it even shows that for some women, the hormone cuts the chances of dying from the disease (by about 67 percent).

The researchers however clarify that the new analysis does not refute research that shows that estrogen-alone hormone HRT still raises the risk of blood clots and stroke. They also warn that taking estrogen alone in women in the absence of progestin increases the risk of uterine cancer.

For the new analysis, Dr. Garnet Anderson of the Fred Hutchinson Cancer Research Center in Seattle and his colleagues tracked 7,645 women from the original group of almost 11,000 study participants, and followed them for almost 12 years. The postmenopausal women had ages ranging from 50 to 79, and all had had a hysterectomy. About half of the women took estrogen for six years and then stopped. The other half took placebo pills for about six years. Most women in both groups had yearly mammograms.

Among women who developed breast cancer, six of those who had taken estrogen died, compared to 16 of those who took placebos — corresponding to a 63 percent reduced risk of dying from the disease.

“We have not done the greatest job of distinguishing between the hormone therapies,” says Dr. Anderson, in an interview with Bloomberg. He’s a principal investigator of the Women’s Health Initiative Clinical Coordinating Center, which is based at the Fred Hutchinson Cancer Research Center. “Estrogen alone for women with a prior hysterectomy has a very different risk profile then estrogen plus progestin.”

According to Dr. Marcia L. Stefanick, professor of medicine at Stanford University School of Medicine, this means that it’s relatively safe for most women to take estrogen alone for several years for menopausal symptoms — but estrogen alone can’t be recommended as a strategy to prevent breast cancer. Sr. Stefanick is another Women’s Health Initiative investigator, but she wasn’t involved in the study.

“This study is reassuring for women at low risk,” she says. “But for women at elevated risk of breast cancer, these data don’t apply. That’s an important distinction.” She also warns that estrogen-alone hormone replacement therapy still raises the risk of blood clots and stroke.

Doctors also warn that estrogen cannot be taken alone in women who still have uteruses, because in the absence of progestin it increases the risk of uterine cancer.

“These agents should not be used for breast cancer prevention, even though we clearly show a lower risk of breast cancer in these women taking hormones,” clarifies Dr. Anderson. “For women who are most in need of a breast cancer reduction strategy, this approach isn’t going to work,” he adds.

But, “if women are suffering from serious menopause symptoms and have had a hysterectomy, then estrogen alone is a reasonable approach,” he says.

Why does estrogen work?
The fact is, it’s not clear why estrogen — known to fuel the growth of breast cancer cells – would work to lower breast cancer risk in women who have had a hysterectomy.

In an accompanying comment to the report of the new analysis, two British doctors say that studies suggests that when estrogen levels begin to decline during menopause, small tumors in the breast adapt and begin to grow at this lowered concentration. The tumors apparently stop growing when estrogen levels are boosted again through HRT.

“The idea is that normally, estrogen acts as a stimulant for breast cancer growth,” but after a period of deprivation, the effects of estrogen change, study author Dr. Chlebowski echoes.

Or to be more precise, the new analysis suggest that estrogen is most beneficial for women 50 to 59 years old, to ease menopausal symptoms, Dr. Howell says in an email to Bloomberg. But he warns that because estrogen may increase the risk of strokes and heart attacks, older women should avoid taking the hormone therapy.

Only one kind of estrogen works?
Another important thing to consider is that the Women’s Health Initiative study tested a kind of estrogen called conjugated equine estrogen, sold under the brand name Premarin and sold by Pfizer.

Scientists surmise that it’s also possible that that only that form of estrogen — made from the urine of pregnant mares — has properties that might reduce breast cancer risk by lowering the body’s natural estrogen.

In recent years, this formulation has lost popularity, as more women are choosing to use estradiol, which mimics the body’s own estrogen more closely. And researchers say they aren’t sure if the two kinds of estrogen work the same way.

“Conjugated equine estrogens are very complex pills,” Dr. Anderson explains. “There are a lot of different estrogen compounds in them. We really don’t know what the active agents are. To make a leap to another form is really hard to say.”

A number of ongoing studies are attempting to scrutinize the effects of other forms of estrogen and other delivery methods on the risk of breast cancer, other cancers and heart disease.

Scientists remain unconvinced
Other experts aren’t convinced. Dr. Valerie Beral, director of the cancer epidemiology unit at Oxford University tells the Globe and Mail: “It’s inconsistent with the totality of evidence that finds estrogen increases breast cancer risk. According to her, the analysis was a subset of a larger trial that wasn’t designed to look specifically at breast cancer.

“If you want to take hormone replacement therapy, estrogen-only has a much lesser effect on breast cancer than with progestin,” she said. “But to say it protects against breast cancer is wrong.”