KE Diet Side Effects and Health Risks. Would you put a tube up your nose just to lose weight? Sounds extreme, doesn’t it? And it is. But that’s exactly what desperate brides are doing now, in the United States.

But long before this diet fad — called the K-E diet — reached its shores, it had already taken root in Europe, in countries like Italy and Spain, where it’s routinely used to lose weight before a big event and for more significant weight loss, the New York Times reports.

The Times report went on to say, “In England, where it has been offered for the past year as the KEN — or ketogenic enteral nutrition — diet, The Daily Mail asked if it was ‘the most extreme diet ever,’ before adding that a National Health Service doctor was offering it.”

In February, the British newspaper The Guardian reported that 1,200 patients in the United Kingdom went under the “diet tube” last year — and clinics offering the procedure have popped up all over Europe.

Feeding tubes are associated with patients in comas, those who are severely ill, or those who can’t feed themselves. This is the Times report on this over-the-top diet was titled, “Bridal Hunger Games” and TIME magazine quips, “something old, something new, something borrowed, something eww.”

What’s worse, these brides are assisted in their desperate — and potentially unhealthy — measures by physicians who charge them US$1,500 for a 10-day plan.

And what exactly is this new diet all about? What are the KE diet side effects?
Called the K-E diet, it’s an increasingly popular stand-in to run-of-the-mill calorie-counting programs — and its popular because it promises dieters that they can shed 20 pounds in 10 days.

To reach that goal, this is what they have to do:
• Dieters on the K-E diet have feeding tubes inserted into their nose, running to the stomachs.
• They’re fed a zero carbohydrate, 800-calorie mixture of protein, fat and water — in a constant slow drip.
• The no-carbohydrate diet is meant to trigger ketosis — a state in which the body switches from being a carbohydrate-burning organism into a fat-burning one. When a person begins burning up fat stores to use as the primary source of energy, he or she loses weight.
• Dieters are under doctor’s supervision but not hospitalized. Instead, they carry the food solution with them, in a bag, like a purse, keeping the tube in their nose for 10 days straight.
• The tubes are removable for one hour a day, and patients can drink water, tea or coffee throughout the day.

Dr. Oliver Di Pietro, of Bay Harbor Islands, Florida, one of the physicians who offers the diet in his clinic, touts the K-E diet is a “hunger-free, effective way of dieting. Within a few hours, your hunger and appetite go away completely, so patients are actually not hungry at all for the whole 10 days. That’s what is so amazing about this diet.” 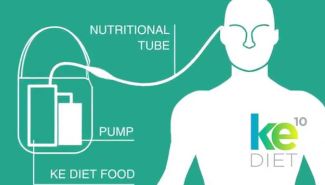 He also claims that the main KE side effects are bad breath and that “there is some constipation because there is no fiber in the food.”

Most doctors and health professionals, however, will say that losing more than three pounds a week can be unsafe.

Dr. Scott Shikora, the director of the Center for Metabolic Health and Bariatric Surgery at Brigham and Women’s Hospital in Boston, tells NY Times: “Putting a tube in one’s nose, it’s not always comfortable and pleasant. And this has to be medically supervised.” But Dr. Di Pietro counters that the brides and other patients are under a doctor’s supervision.

One future bride, 41-year-old Jessica Schnaider, agreed to have her dieting story shown on national television.

“I don’t have all of the time on the planet just to focus an hour and a half a day to exercise so I came to the doctor, I saw the diet, and I said, ‘You know what? Why not? Let me try it. So I decided to go ahead and give it a shot,” Ms. Schnaider told Good Morning America.

While she says she wasn’t hungry, she admits to being tired all the time. “I was tired,” Ms. Schnaider says. “I didn’t feel like exercising. The doctor told me that if you can complement (the diet) with walking for half an hour on the beach, that would be great, but I didn’t feel like doing that. I’m a very energetic person, but those days I was a little tired.”

Schnaider also says “It was emotionally difficult, the 10 days of not eating.” And she had to explain to concerned friends that she wasn’t ill or dying. “And I was like, ‘No, I’m not sick, I’m not dying, I’m fine,’” she says.

Not uncommon
While Schnaider may seem like a masochist to some, she — and her extreme dieting measures — aren’t all that that uncommon. A whopping 70 percent of 272 brides surveyed by Cornell University researchers Lori Neighbors and Jeffery Sobal in 2007 admitted they wanted to lose weight. And, 20 was the typical number of pounds they wanted to shed.

Increasingly bombarded by messages from Hollywood and the fashion industry saying that thin is glamorous and beautiful — and knowing that the bridal photos last forever, even if the marriage doesn’t– brides are increasingly turning to these crazy crash diets.

But is it effective?
Health experts have to acknowledge that, yes, the K-E diet does allow people to lose weight rapidly. It’s the strict dieting that makes a difference.

“It doesn’t matter if it’s through a tube, a straw, a meal plan,” Dr. Scott Shikora, the director of the Center for Metabolic Health and Bariatric Surgery at Brigham and Women’s Hospital in Boston, tells TIME magazine. “They all work, if someone goes from 3,000 calories a day to 800.” The severe restriction of calories combined with a no-carbohydrate plan that induces ketosis works.

But for Dr. Jeff Gardere, a clinical psychologist, anyone considering the diet may have deeper issues to address. “It really does speak volumes about the lack of self esteem,” he tells Fox News. “And they may in the future resort to such drastic measures for other events and other situations in their lives.”

Considering the immense popularity of the diet, does this mean that hordes or women across the world have low self-esteem? Most likely, but that’s not all.

KE diet side effects and health risks
Critics warn that losing too much weight too fast can be dangerous, and it ultimately won’t last.

The K-E diet of about 800 calories a day has the potential to be even more harmful and less long-lasting than so-called liquid starvation diets of fewer than 1,000 calories a day, Dr. Suzy Weems, a professor at Baylor University and a former chairwoman of a public policy committee for the American Dietetic Association tells the United Press International.

“It seems very extreme because of its potential for infections and irritation,” Dr. Weems says in a statement. “It seems to be illogical to do this for one fairy-tale day when most brides have plenty of time before their weddings to lose weight in a healthy way.”

Other potential KE diet side effects include infection from having a feeding tube up your nose, headaches — and yes, ketosis does have the potential of causing kidney stones and loss of muscle mass.

KE diet side effects: it also harms your heart
Crash diets may even harm your heart. Cardiologist Dr. Isadore Rosenfeld, a professor of clinical medicine at Weill Cornell Medical College, in New York City, and author of the forthcoming “Doctor of the Heart: A Life in Medicine,” opposes crash diets that call on dieters to consume less than 1,200 calories a day.

Long-term calorie cutting can eventually lead to heart muscle loss. “Yo-yo dieting can also damage your blood vessels. All that shrinking and growing causes micro tears that create a setup for atherosclerosis and other types of heart disease,” she says.

Crash diets lead to shortages of potassium, magnesium, and copper — and these are possible causes of the palpitations and arrhythmias seen in crash dieters. Studies have also found that the diets can cause a drop in blood pressure and sodium depletion.

Lose weight safely
So you still want to lose weight? Do so. If you’re overweight — as more than one-third of all people in the United States, Canada, Europe and Australia are — slimming down is critical for your overall health. Even moderate weight loss can lower your risk of developing heart disease, diabetes, and some types of cancer.

But do lose weight sensibly and safely. And this means, s-l-o-w-l-y but surely. Doctors recommend dropping just 1 to 2 pounds a week. And the best way to do that is to stick to a diet that limits saturated fat and sugars and emphasizes fruits and vegetables, lean meats and fish, and whole grains.

“The key to losing weight is a combination of diet and exercise,” says Dr. Rosenfeld. “One alone will not do it.”

There you have it health watchers, why risk these dangerous KE diet side effects if you can lose weight through diet and exercise?