Korlym Side Effects, Safety, and Risks. The symptoms are distressing: A fatty hump between your shoulders like a buffalo hump. A rounded or “moon” face. Acne, obesity and fatty deposits around the abdomen. Pink or purple stretch marks on the skin abdomen, thighs, breasts and arms. Thin and fragile skin that bruises easily. Slow healing of cuts, insect bites and infections.

Women who have this disease have thicker facial hair, and irregular or absent menstrual periods, while men experience erectile dysfunction, decreased libido and fertility.

In time, people who suffer from this illness also develop high blood pressure, bone loss, infections, kidney stones, diabetes, and on occasion, psychosis. If left untreated, the disease can cause severe illnesses, even death.

What’s more tragic is that it affects people in their prime—commonly those between 25 and 40 years old.

The disease is endogenous Cushing’s syndrome.

It’s a rare, but it’s a serious and debilitating multisystem disorder caused by the overproduction of the stress hormone cortisol, a steroid hormone produced by the body’s adrenal grand. Because cortisol increases blood sugar, the disease is particularly dangerous for people with diabetes.

FDA approval
But recently, a drug has been developed to treat this dreaded disease—and the United States Food and Drug Administration approved it on Feb. 17.

Prior to this, there were no approved medical therapies for the treatment of endogenous Cushing’s syndrome. 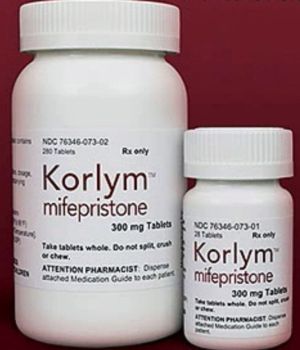 The drug, Korlym (mifepristone), doesn’t decrease production of cortisol, but reduces the effects of overproduction, such as high blood sugar levels, the FDA said in a news release. It does this by blocking the binding of cortisol to its receptor.

It’s approved is for people with the endogenous type of the disease—meaning it’s caused by an internal dysfunction in the body rather than the other type caused by taking certain medications for another diseases.

Apart from having the endogenous type, patients also have to have type 2 diabetes and a history of not being able to respond to previous surgery or aren’t candidates for new surgery, before Korlym can be prescribed for them.

Korlym, a once-daily pill, will be available on May 1 through a small number of endocrinologists who treat patients affected with the disease, Joseph Belanoff, Corcept’s chief executive officer, told Bloomberg on Feb. 18. “These doctors can be reached without a large sales and marketing infrastructure,” he said.

Only about 5,000 people in the U.S. are likely to be eligible for the Korlym, which received an orphan drug designation by the FDA in 2007. This means it’s eligible to be sold free from generic competition for the next seven years.

Safety trials
The federal regulator approved Korlym based on an evaluation of its safety and efficacy in a single clinical trial with 50 patients.

Participants who took Korlym had “significant improvement in blood sugar control,” the FDA said, adding that some patients even reported experiencing marked reductions in their insulin requirements and even lessening symptoms of their disease.

The approval was also backed by additional several safety pharmacology studies, drug-drug interaction studies and published scientific literature. In addition, a separate open-label extension of this trial is ongoing.

Outweighing the risks
Korlym didn’t have to go through a Risk Evaluation and Mitigation Strategy (REMS) for it to be approved by the FDA, unlike most drugs. The agency said this was because the drug’s benefits outweigh the risks for patients with endogenous Cushing’s syndrome:

1. Patients of this form of Cushing’s syndrome are very sick and would suffer a lot if the drug was not made accessible to them, as there are no other approved medical therapies for this debilitating disease.
2. The number of Cushing’s syndrome patients who will require treatment with Korlym is small (5,000) and the number of health care professionals in the U.S. who are expected to prescribe Korlym is also very small and highly specialized. This group of doctors are familiar with the risks of Korlym treatment and capable of monitoring patient status frequently.
3. Physician and patient labeling can help manage the risks of Korlym treatment.
4. The risks associated with Korlym will be outlined in a medication guide for patients.

As most retail pharmacies are unlikely to keep adequate supplies of drugs for any rare condition, the drug’s manufacturer, Menlo Park, California-based Corcept Therapeutics Inc., said it will distribute Korlym through a central pharmacy. This will ensure the timely, convenient and appropriate delivery of the drug to Cushing’s patients or to the health care institutions where this therapy may be initiated, the drug maker said.

Korlym side effects
The most common Korlym side effects experienced by endogenous Cushing’s syndrome patients treated with the drug in clinical trials were nausea, fatigue, headache, arthralgia, vomiting, swelling of the extremities, dizziness and decreased appetite.

Other Korlym side effects include adrenal insufficiency, low potassium levels, vaginal bleeding and a potential for heart conduction abnormalities.

As certain drugs used in combination with Korlym may increase its drug level, doctors must be aware of this potential for drug-drug interactions and adjust dosing or avoid using certain drugs with Korlym.

Pregnancy rarely happens in Cushing’s syndrome patients because of the suppressive effect of excess cortisol on female reproductive system. Still, Korlym will carry a Boxed Warning advising health care professionals and patients that the medication must never be used in pregnant women because it will terminate a pregnancy. Mifepristone is also the active ingredient of the abortion pill RU-486.