Lipstick Side Effects: Lead Poisoning? In our earlier post on makeup side effects, we mentioned that lipstick contains the element lead which is known to be poisonous to humans. Does this mean that you should stop throw your lipstick to the garbage can? 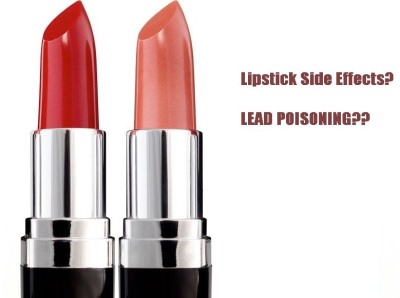 Well, maybe not. The Food and Drug Administration has, in the past, declared that the level of lead in lipstick are not a health risk if it is recorded at 10 parts per million (ppm) or less. Recently, it reiterated this position when it issued a draft guideline for cosmetic manufacturers. Specifically, it says that it has “analyzed 685 products and found that more than 99 percent of products tested contain levels of lead that are at or below FDA’s recommended maximum level for lead as an impurity”.

Lead gets into the body either through swallowing or absorption, the FDA looked into the possibility that lipstick users will swallow or absorb dangerous levels of lead and arrived at the following conclusions:

Based on these factors, we concluded that up to 10 ppm lead in cosmetic lip products and externally applied cosmetics would not pose a health risk.

But isn’t lead cumulative? What would happen to a heavy lipstick user who swallows or absorbs what one might say “very negligible levels of lead” but who does it many times a day over a long period of time? What would be the lipstick side effects in this instance?

Interestingly, the FDA has not said anything about accumulated lead from cosmetic use which is why it is drawing criticisms from the Campaign for Safe Cosmetics. From said Campaign’s website:

The cosmetics industry has ignored the findings of toxic metals in lipsticks, arguing that it’s not a source of concern because the dose is so low per application. That is essentially the argument made by the FDA as well.

But, what both the industry and FDA are ignoring is the issue of cumulative exposure; that is, exposure to a little bit of a toxic chemical over a long period of time can add up to harm. A chemical like lead builds up in the body over time so low exposures repeated daily can add up to a significant exposure.

We are on Team Campaign on this one. The science is clear that lead accumulates in the body once it gets inside. There is no way such accumulated lead will not have any side effect, no?