Male Body Waxing Side Effects. Huh, did you know that body waxing can change the color of your skin? The discoloration is temporary but it can get uncomfortable. Other side effects of body waxing include: ingrown hair, pain, bruising and bleeding, burned skin, pimples, redness, inflammation. 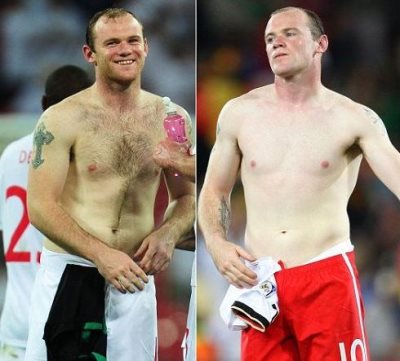 Do you think Wayne Rooney experienced any of the above-mentioned male body waxing side effects?

A possible long term side effect of body waxing would be the loss of skin elasticity due to the skin pulling that happens during body waxing. More info about this from lovetoknow.com:

Waxing involves pulling the skin, no matter how gentle the waxer may be. Over the long term, this pulling can lead to a loss of elasticity and strength in the skin. Once this happens, the skin is then more prone to wrinkling. This will be seen on the most delicate skin, such as around the eyebrows, but can also occur on all affected skin. So while waxing can improve one’s appearance and make someone feel cleaner and sexier in the short term, it can lead to premature aging.

Anyhoo, the Food and Drug Administration has this to say about what you should look out for when it comes to body waxing:

With waxing, a layer of melted wax is applied to the skin and allowed to harden. (Cold waxes, which are soft at room temperature, allow the user to skip the steps of melting and hardening.) It is then pulled off quickly in the opposite direction of the hair growth, taking the uprooted hair with it.

Labeling of waxes may caution that these products should not be used by people with diabetes and circulatory problems. Waxes should not be used over varicose veins, moles, or warts. Waxes also shouldn’t be used on eyelashes, the nose, ears, or on nipples, genital areas, or on irritated, chapped, or sunburned skin. As with chemical depilatories, it can be a good idea to do a preliminary test on a small area for allergic reaction or irritation.

Well, we hope you take proper precautions before you go do some body waxing. For other male health-related stories, go check out our post on Testosterone Booster Side Effects.