Nicotine Patch Side Effects and Benefits. A new research study shows that nicotine patches can boost memory in older nonsmokers with mild cognitive impairment, a common precursor to dementia or Alzheimer’s disease.

The new study, sponsored by the National Institute on Aging (NIA), was modest in size, involving about 70 people over six months. But lead researcher Dr. Paul Newhouse said it’s the largest study ever done to investigate how nicotine might improve memory. Newhouse is director of the Center for Cognitive Medicine at Vanderbilt University Medical Center.

“There were improvements in attention and memory performance in patients who took the nicotine patch compared to those with the placebo patch,” Dr. Newhouse told NPR’s Health Blog Shots. “The placebo patients stayed the same or got worse.”

That nicotine improved alertness, coordination and cognitive functioning has been established by previous research and the latest study suggests it may help improve attention, memory and mental processing in people with mild memory loss. Pfizer provided the patches for the study.

Nicotine affects memory because it mimics the neurotransmitter acetylcholine that stimulates nerve cell receptors in the brain involved in attention, learning and memory skills.

Newhouse said this is why smokers who cut their nicotine intake to zero when they quit and have a harder time remembering things at first. Eventually, their brains rebound and memory returns to normal.

Because the brain receptors of a person with Alzheimer’s are already damaged, Newhouse decided to study people on the brink of losing receptor function to see if he could alter the course of memory loss.

“It’s like a heart attack: We don’t wait till you get one to treat you. We use a biomarker, like cholesterol or blood pressure, so we can act with an early intervention,” he explained.

For the study, Dr. Newshouse and his colleagues recruited 74 nonsmokers with an average age of 76 and divided them into two groups. One group got a daily nicotine patch of 15 mg for six months; the other group got a placebo. Both groups did not know whether they had the real patch.

Improved attention was assessed with the Connors Continuous Performance Test (CPT) and clinical improvement was measured by clinical global impression and safety measures, buttressed by computerized cognitive testing and patient and observer ratings.

Writing in Neurology, the researchers said the patches helped patients do better on cognitive tests for “attention memory, speed of processing and consistency of processing.”

After six months of treatment, the nicotine group regained 46 percent of normal long-term memory for their age. The placebo group got 26 percent worse.

The researchers also report that the patients suffered no serious side effects and had no trouble discontinuing the treatment. 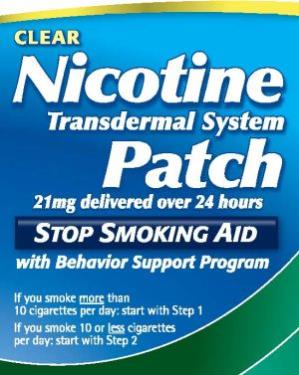 Larger study. But although nicotine did improve memory somewhat, qualitative judgments by doctors blinded to the test showed that nicotine didn’t show a significant change in the patients’ “global functioning” or their ability to handle life’s everyday problems.

This is why Newhouse is planning a larger and longer trial, which will also be supported by the NIA. “We want to see if we can improve performance but also symptom difficulties with memory and change the trajectory on how people decline in Alzheimer’s.”

Does this study mean that ordinary people like you and I can use patches to boost our memory? No, Newhouse says.

“Nicotine doesn’t help normal performance. It only does if you are tired, anxious, upset—impaired in some way,” he says.

Nicotine Patch Side Effects. The following are the more common nicotine patch side effects:

Meanwhile, these are less common but severe nicotine patch side effects:

Go to your doctor ASAP if you experience any of the above sever nicotine patch side effects.