Opana Side Effects, Abuse, and Addiction. Opana, whose generic name is oxymorphone, is increasingly becoming the hot new prescription drug of abuse in rural communities in the United States — with tragic consequences.

Also known by its street names, “the O bomb,” “new blues,” and “stop signs,” Opana is an opioid pain reliever similar to morphine. When used properly, oxymorphone is indicated to treat moderate to severe pain like osteoarthritis pain, chronic low back pain and cancer pain. It works by dulling the pain perception center in the brain.

The drug has an extended-release form designed for around-the-clock treatment of chronic pain — but crushing ruins this “extended” design, releasing the drug all at once. This is why street users who abuse Opana crush the tablets and either snort or inject it. 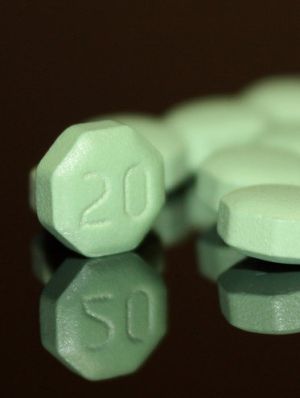 According to the Centers for Disease Control, rural residents are nearly twice as likely to overdose on prescription drugs than people in big cities. Meanwhile, these pills lead to more deaths in the U.S. than heroin and cocaine combined.

It’s barely a quarter into 2012, but Reuters reports that for this year at least nine people have already died from prescription drug overdoses in Scott County — a small county of just 24,000 residents found in Indiana’s southern tip, about 30 miles from Louisville, Kentucky. Most of the fatalities involved Opana.

“We’re seeing a lot of 25-year-olds who are dead for no apparent reason,” county coroner Kevin Collins tells Reuters. He’s says so disheartened by the overdoses that it’s one reason he won’t run for reelection in May.

“This Opana pill has really kicked us in the rear,” says Indiana State Police Sergeant Jerry Goodin. “We’ve never seen an addiction like this.”

Before 2011, only about a fifth of the cases referred to the country coroner were overdose deaths — and most were suicides rather than accidents. But last year, prescription drug overdoses accounted for about half of all deaths referred — a total of 19.

Even before Opana, Scott Country has been a hot spot for prescription drug abuse. In 2010, Scott County snapped up 48.79 dosage units per capita — the highest in the state, according to Lori Croasdell, a coordinator for CEASe, a drug abuse prevention group in the county.

Dr. Shane Avery, a Scott County doctor surmises that the reason prescription pill abuse is on the rise is that Americans are turning to pills as a quick to fix the pitfalls of the human condition — pain, anxiety, depression and hopelessness.

Indeed, Scott County is one of the poorest areas in Indiana, with a median household income of US$39,588 in 2010. And since abusers can’t hold a job, drugs cause a vicious cycle of poverty, says Scott County Sheriff Dan McClain. “Most of them sleep until noon, get up, and try to find a way to get another pill,” says McClain.

But Opana isn’t just a problem in Scott, Indiana — its misuse has been reported by abuse experts around the U.S. In Florida, for example, the number of oxymorphone-related deaths in 2010 rose 109 percent from the previous year, reaching 493, according to Jim Hall, director of a drug abuse center at Florida’s Nova Southeastern University.

Even in Nashville, Tennessee, Detective Michael Donaldson tells Reuters he’s seen an increase in Opana abuse. According to him, many small towns have “dirty doctors” willing to write out prescriptions for the pain drug even when it’s unneeded.

Reformulated Oxycontin drives rise in Opana use
Alarmed by the rise of Opana abuse, law enforcement officials across the nation pin the blame on the reformulation of another opioid, Oxycontin, in late 2010. That year, Oxycontin’s makers decided to reformulate that drug to make it more difficult to crush and snort or inject to get a heroin-like high.

Oxycontin, the brand of oxycodone, used to be the drug of choice in small towns — but it’s quickly being replaced by Opana because the reformulated Oxycontin pills become gummy when crushed and can’t be readily snorted or injected. This is driving abusers to switch to Opana — or to generic, immediate-release forms of oxycodone, warns John Burke, president of the National Association of Drug Diversion Investigators.

The good news is that Endo Pharmaceuticals — the maker of Opana — announced in December that it would reformulate Opana. Company spokesman Kevin Wiggins says the new formulation makes it difficult to crush and the pill turns viscous or “gooey” if an abuser tries to add liquid to it. The new pill is being manufactured now.

But the old form of Opana is still available, and police in small towns say pharmacy and home robberies are on the rise as addicts search for a way to get their fix.

“We’re pretty much consumed by it,” says Shane McHenry, a detective with the Dearborn County Sheriff’s Department in southern Indiana, says of Opana.

What’s worse, Endo Pharmaceuticals has acquired a patent to produce a generic version of oxymorphone hydrochloride — the key active ingredient in all formulations of Opana — from London-based Johnson Matthey. The patent covers the new crush-resistant Opana ER — but also all older versions of oxymorphone. Acquiring the patent gives it patent protection until 2029.

This means that until 2029, generic — and therefore cheaper — forms of crushable, snortable and injectable Opana would still be available.

Potent … and deadly
Opana abuse can be deadly because it’s more potent, per milligram, than Oxycontin, and users who are not familiar with how strong it’s may be vulnerable to overdosing. Researchers have identified Opana as being around seven times more powerful than the morphine compound.

Opana also carries a high risk of dependency and addiction. Overdose is extremely dangerous and can lead to respiratory depression and death. This is worsened when Opana is combined with other substances like alcohol or benzodiazepines — Valium or Xanax.