Propecia Side Effects: Impotence & Erectile Dysfunction? Hair growth drug Propecia solves baldness but does it cause impotence? If you had to make a choice between having a head full of hair and being able to ‘get it up’ whenever you want, which would you choose?

Or, let’s put it this way: if you’re male and you’re balding, would you do everything you can to get back a head full of hair? If this meant that the best medication for baldness would also make you impotent, would you still go ahead and take these drug?

Because that’s what it means to take finasteride, a drug approved by the United States Food and Drug Administration since 1997 for the treatment of male pattern baldness (MPB).

Marketed under the brand name Propecia, the new drug’s been found to be very successful in reversing hair loss in men — and many men swear by the drug. But on the other hand, irreversible impotence is one of its side effects.

The drug is so effective at making hair grow back because it’s a synthetic 5-alpha-reductase (5AR) inhibitor – it inhibits the enzyme that converts testosterone to dihydrotestosterone (DHT) and works to stop balding by blocking the body’s production of the hormonal culprit of hair loss: a male hormone in the scalp that stops hair growth.

Because of its male hormone-blocking function, finasteride is also an effective medication for benign prostatic hypertrophy or enlargement of the prostate gland.

In fact, this is what it was originally made for, and it was approved by the FDA in 1992 for this, in a dosage five times higher than that used to treat thinning hair (5 mg rather than 1mg) and under another another brand name, Proscar.

Used for this condition, it effectively treats distressing symptoms like frequent and difficult urination and may even reduce the chance of acute urinary retention or the sudden inability to urinate. It also lowers the chance that prostate surgery will be needed.

But Health Side Effects was alerted to publishing this piece on the pros and cons of using finasteride when a new study praising the effectiveness of Propecia as treatment for hair loss was published on Feb. 13 in the Journal of the American Academy of Dermatology.

In the new study, Dr. Elise A. Olsen, of the Duke University Medical Center in Durham, North Carolina, and her colleagues found that over a two-year period, finasteride increased hair growth in all four areas of the scalp affected by male pattern baldness. The drug was also found to reduce hair loss in two or more of these areas, depending on patient age.

The Duke University researchers conducted a randomized, double-blind, multicenter study on men with vertex hair loss. Study participants were given either finasteride (1 mg/d) or a placebo for 24 months.

Participants were also divided into two groups based on age (18 to 41 and 41 to 60 years), and to determine how effective the drug was, standard global photographic assessment was taken of all four scalp areas normally affected by balding: the vertex, anterior/mid-scalp regions, frontal and temporal hairlines.

The problem with the study, however, was that it was funded by Merck & Co Inc, and several authors admitted financial ties to the drug maker.

Despite that, even in this Merck-funded study, researchers found that men treated with finasteride experienced sexual side effects at a slightly higher rate than participants who were “treated” with a placebo.

Propecia Side Effects: Impotence and other sexual side effects
In fact, one study done last March by researchers from the Boston University School of Medicine found that finasteride and another drug used to treat hair loss or an enlarged prostate, dutasteride (Avodart), caused sexual dysfunction — including erectile dysfunction and loss of libido.

The study, a meta analysis of all previous medical literature conducted since both medications were approved by the FDA, included the clinical trials used for the drugs’ approval and also showed that finasteride and dutasteride caused mental depression. 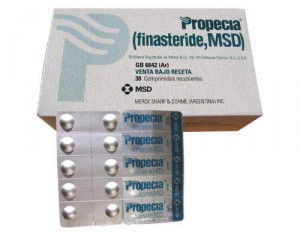 The findings were published in the March 2011 issue of the Journal of Sexual Medicine. To be precise, the findings showed that eight percent of men taking finasteride and dutasteride reported erectile dysfunction, and 4.2 percent reported reduced libido, compared with four percent and 1.8 percent of men receiving placebo, respectively.

What’s worse, in a small percentage of cases, sexual dysfunction and depression persisted even after the meds were stopped.

For those men, “it’s a life sentence,” says lead researcher Dr. Abdulmaged M. Traish, a professor of biochemistry and urology at the Boston University School of Medicine. “No sex. No desire. Potential depression,” he adds.

In fact, according to Dr. Traish almost all men who take these drugs to treat thinning hair will experience some of these distressing Propecia side effects — only the intensity varies. “Some experience it more drastically than others,” he explains.

This is because finasteride works by blocking an androgen similar to testosterone. Produced primarily in the testicles, testosterone is also made by the adrenal glands. Most testosterone in a man’s body is bound to a protein produced in the liver called the sex hormone-binding globulin (SHBG). This protein transports testosterone in the bloodstream, prevents its metabolism and prolongs its half-life.

As Dr. Traish explains, “We need androgen for erectile function, libido and ejaculation, and for just feeling good.”

Clinical trials
This wasn’t the first study to show that finasteride had undesired side effects on sexual function. Even the 12-month clinical trial conducted by Merck to gain FDA approval showed the same findings. Reports received by the FDA between June 1992 and February 1995 also showed these side effects, and the same dreaded side effects showed up in postmarketing experience reports for the past 16 years since 1995.

This is why, the side effects are listed in the final product package insert for finasteride sold in the U.S. The insert clearly states that the clinical trial involving 945 men showed that the hair-growth drug caused the following sexual side effects:
• impotence (1.1 percent to 18.5 percent)
• abnormal ejaculation (7.2 percent )
• decreased ejaculatory volume (0.9 percent to 2.8 percent)
• abnormal sexual function (2.5 percent)
• erectile dysfunction (1.3 percent)
• ejaculation disorder (1.2 percent)
• testicular pain (no data in percentage)
• and even gynecomastia or the growth of male breasts (2.2 percent).

The PPI also states that patients have reported that erectile dysfunction persisted even after the medication was discontinued.

In December 2008, the Medical Products Agency, Sweden’s drug regulator ended a safety probe of finasteride, concluding that the drug may cause irreversible sexual dysfunction. The updated safety information released by the MPA lists this as a possible side effect. Difficulty in obtaining an erection persisted in some cases even after the drug was stopped, the agency said.

In the United Kingdom, the Medical and Healthcare Products Regulatory Agency (MHRA) also said that it had received reports that erectile dysfunction persisted even when men stopped taking the hair-growth drug.

Consequently, Propecia’s label in Sweden, the UK and Italy bears this warning. But there’s a discrepancy between warning labels of the drug sold in Europe and the U.S.

In the U.S., the leaflet simply says: “In clinical studies, side effects from Propecia were uncommon and didn’t affect most men. A small number of men experienced certain sexual side effects. These men reported one or more of the following: less desire for sex; difficulty in achieving an erection; and, a decrease in the amount of semen. Each of these side effects occurred in less than two percent of men. These side effects went away in men who stopped taking Propecia. They also disappeared in most men who continued taking Propecia.”

Other known finasteride or Propecia side effects are:

Endocrine side effects: Prostate specific antigen (PSA) levels are slashed by about 50 percent. Because PSA levels are commonly used to screen for prostate cancer, the halved PSA levels means this cancer won’t be diagnosed early and early treatment won’t be implemented.

Because of this, doctors advise that men who use finasteride for hair-loss should be carefully evaluated for prostate cancer.

Oncologic side effects: The appearance of prostate cancer is prevented or delayed. At the same time, finasteride has also been linked to an increased risk of high-grade prostate cancer — the type that spreads and grows more quickly than other kinds of prostate cancer. Postmarketing reports have also included rare cases of male breast cancer.

In 2011, the FDA added a warning to finasteride’s label, noting an increased risk of high-grade prostate cancer. The potential risk for developing prostate cancer from taking finasteride hasn’t been established, but studies suggest that the drug may temporarily reduce the growth and prevalence of benign prostate tumors and mask the early detection of prostate cancer.

Merck has since revised the warning in consumer and medical leaflets in both the UK and the U.S. to include the risk of male breast cancer.

Gastrointestinal side effects: Nausea and flatulence

Dermatologic side effects: At least one case of the skin rash, cutaneous leukocytoclastic vasculitis, was reported and resolved after finasteride was stopped. A 58-year-old man acquired an itchy, lumpy rash on his upper and lower extremities after two weeks of being treated with finasteride for prostatism. Prior to the episode, the patient had no known allergies and was taking no other medications.

Hypersensitivity side effects: Pruritus, urticaria and swelling of the lips and face

Respiratory side effects: Rhinitis (1.0 percent) and dyspnea (0.7 percent) have been reported.