The weight-loss product, marketed extensively online and on false claims of being “100% natural,” contains a controlled substance that can increase blood pressure and pulse rate in those who take it.

The FDA has since warned consumers not to buy or use Slim Xtreme Herbal Slimming Capsule, a product distributed by Globe All Wellness, LLC.

The maker has since voluntarily withdrawn the product, and as of May 2011, no illnesses or injuries have been in connection with this product.

Slim Xtreme Side Effects. Slim Xtreme Herbal Slimming poses a threat to consumers because sibutramine can substantially increase blood pressure and /or pulse rate in some patients. It may also present a significant risk for patients with a history of coronary artery disease, congestive heart failure, arrhythmias and stroke.

“Consumers should stop using this product immediately and throw it away. Consumers who have experienced any negative side effects should consult a health care professional as soon as possible,” the FDA said.

Slim Xtreme Herbal Slimming Capsule may also interact in life threatening ways with other medications a consumer may be taking, the FDA said in an advisory on May 10, 2011.

Some of these drugs with potentially life-threatening reactions to sibutramine are:

Other Globe All Wellness slimming products such as Slim Extreme Gold and Gelslim have not been declared unsafe by the FDA nor recalled by the manufacturer. 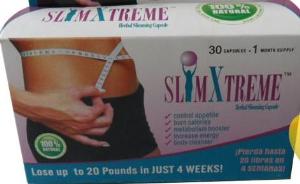 Many contraindications, serious Slim Xtreme side effects
Until it was declared a controlled substance in the United States in 2010, Sibutramine was routinely prescribed to people who wanted to lose weight.

An appetite suppressant, the drug acts on the brain’s appetite control centers. Doctors used to prescribed it once a day for people who wanted to lose weight, in combination with a reduced diet and an exercise regime.

On October 8, 2010, its manufacturer, Abbot Laboratories, announced that it was withdrawing sibutramine from the U.S. market under pressure from the FDA.

Serious side effects of sibutramine and drugs which contain it like Slim Xtreme Herbal Slimming Capsule include:

Slim Xtreme Herbal Slimming Capsule was sold nationwide via the Internet and at the company’s headquarters in Hollywood, Florida. Even today, the product still has an extensive Internet presence and a google search producing almost 51,000 results.

Consumers are advised to return the product to:

Consumers with questions may contact the company at (954) 922-1133 Monday through Friday from 9:00am to 4:00pm EST for instructions on the return process.