Smokeless Tobacco Side Effects. Healthwise, is smokeless tobacco safer than smoked tobacco? Is tobacco less dangerous to your body if you don’t smoke it and, instead, take it in through other ways? Is Ashton Kutcher — who was spotted by the paparazzi buying snuff — less likely to develop cancer if he uses snuff rather than cigarettes?

Apparently, smokeless tobacco is not safe at all. It can still give you cancer (oral, esophageal, and pancreatic). Smokeless tobacco can also cause heart disease, gum disease, and oral lesions such as leukoplakia.

Let this be a warning to those who mistakenly think that chewing or simply inhaling tobacco is not hazardous to their health. 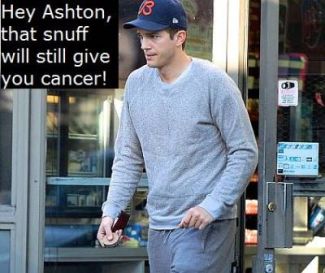 There is no such thing as safe tobacco according to the National Cancer Institute. From cancer.gov:

There is no safe form of tobacco. At least 28 chemicals in smokeless tobacco have been found to cause cancer.

The most harmful chemicals in smokeless tobacco are tobacco-specific nitrosamines, which are formed during the growing, curing, fermenting, and aging of tobacco.

The level of tobacco-specific nitrosamines varies by product. Scientists have found that the nitrosamine level is directly related to the risk of cancer.

If you think smokeless tobacco does not cause addiction, you should think again. Nicotine is highly addictive and anyone who takes it in — whether through smoking or other means — could be addicted to the substance.

We hope that the above smokeless tobacco side effects and health risks will discourage you from partaking in this Copenhagen Snuff. 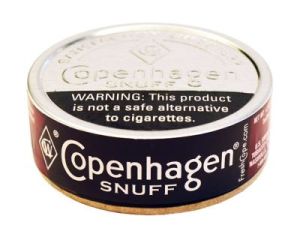 Smokeless Tobacco Side Effects: Is It Safe and Not Addictive? posted 6 October 2016. Latest update on 24 June 2022.