Steroid Gynecomastia Corrective Surgery for Guillermo Eiland. Did you know that use of steroids can lead to “manbreasts”? This is the case for 1990s rapper Guillermo Eiland, of the rap group Bone Thugs n Harmony, who was recently featured on the E! television show, Botched, about patients who have to undergo corrective procedures for their previous botched surgeries.

According to the show, Eiland began to develop breasts after years of steroid use. He underwent surgery to reduce the size of his chest but his original surgeon was not up to the task as the procedure left him with a lot of loose skin and sagging breast tissues. Fortunately for Guillermo, he was able to participate in the Botched reality show where Dr. Terry Dubrow managed to rectify the rapper’s condition.

Here’s a pic of the procedure courtesy of E! 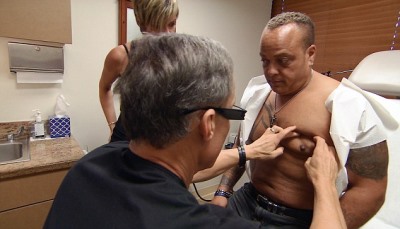 Before and after images. 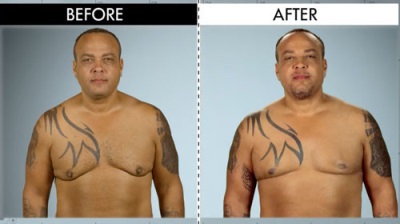 The Daily Mail has more details on Guillermo’s story:

Mo Thugs rapper Guillermo ‘Big Caz’ Eiland finds himself asking the doctors to rectify his case of ‘man boobs’. Guillermo’s former steroid addiction caused gynecomastia, a condition that causes female breasts to form on a man’s body. After a botched chest surgery left him with sagging breast tissue, he is looking to the doctors for help.

‘This is a guy who is used to getting up on stage and ripping off his shirt and feeling great about himself, but he has got a lot of loose skin, so we have to figure out how to remove that loose skin without leaving unsightly scars,’ Dr Dubrow explains of the star’s pectorals.

It soon becomes clear to Dr Dubrow that Guillermo needs a breast reduction that will leave him with scars around his areola – and possibly across his chest.

May this story serve as a warning to those of you dear readers who use steroids for bodybuilding purposes. You don’t want to be the guy who think he’ll bulk up to be manly but who’ll end up with humongous womanly bumpers, don’t you?

Want to know why gynecomastia is a side effect of steroid use? Well, Dr. Mordcai Blau of the Westchester New York Aesthetic Plastic Surgery has the answer for us (via cosmetic-md.com):

Anabolic steroids are often the cause of gynecomastia in athletes and bodybuilders. The large male breasts consist of mammary gland tissue. Most of the breast tissue is behind the areola nipple complex which causes protruding nipples. The condition may appear worse prior to important competitions because when a bodybuilder is palpated and at his leanest, the condition becomes more obvious.

The type of gynecomastia commonly seen in these athletes is attributable to synthetic anabolic steroid use. The hormone testosterone levels rise rapidly in these men when large quantities of exogenous steroids are ingested, and their bodies respond by converting this excess testosterone into the hormone estrogen by means of aromatase enzymes. The higher levels of testosterone will produce the muscle mass gains desired, but the increased estrogen often causes permanent changes in the glandular tissue of the breast. This type of gynecomastia can happen at any time, even after the first injection.

That’s it for now, fellow Health Side Effectsers! Be healthy as always!