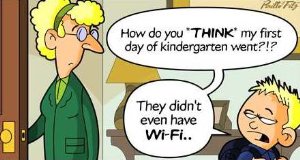 The Mobile Telecommunications and Health Research Programme, which Challis heads, is an £8.4 million investigation into the potential health risks of mobile phones set up in 2007. It is funded by both government and industry.

On its Website, the Health Protection Agency, UK’s health regulator, says that radiofrequency (RF) energy emitted by Wi-Fi equipment is extremely low and is not associated with any health problems. This is also the position of the World Health Organization.

WHO also says that despite growing concern over the wifi side effects and long-term exposure to low-level RF energy, there is still no consistent evidence to show that these are dangerous to human health.

WiFi Health Risks on Children: Brain Development? But Prof. Challis said he was concerned that few studies have been carried out to investigate the level of RF exposure particularly in classrooms. He said he worried that if health problems do emerge they are likely to be more serious in children, whose bodies and brains are still developing.

“Children are much more sensitive than adults to a number of other dangers, such as pollutants like lead and UV radiation, so if there should be a problem with mobiles, then it may be a bigger problem for children,” he told the Telegraph in 2007.

Until more research had been carried out, he said, children who used Wi-Fi enabled laptops should only do so if they are kept a safe distance from their embedded antennas. He also advised that the intensity of Wi-Fi waves in schools be measured and monitored.

Prof Challis said: “With a desktop computer, the transmitter will be in the tower. This might be perhaps 20 centimeters from your leg and the exposure would then be around one percent of that from a mobile phone.

“However if you put a laptop straight on your lap and are using Wi-Fi, you could be around 2cms from the transmitter and receiving comparable exposure to that from a mobile phone.” he said.

Wi-Fi radiofrequency
Next to cell phones, Wi-Fi is the most common form of wireless technology today. Across the world, it is widely used in schools, offices, coffee shops, houses and public spaces, and its use is spreading.

This wireless technology relies on an extensive network of fixed antennas, or base stations, relaying information with radiofrequency (RF) signals.

Health and consumer protection groups are concerned that Wi-Fi RF signals could interfere with the electrical signals used routinely by brains and nervous system.

Right next to the router or computer transmitter, the maximum signal strength is far below—0.1 watts—and the power level falls off very rapidly past a few centimeters from the transmission points.

But the RF in classroom containing 20 laptops and two routers could combine and be equivalent to that of a mobile phone.

“Based on studies reporting effects experienced by people living near mobile phone masts, I would predict chronic fatigue, memory and concentration problems, irritability and behavior problems –exactly what we are seeing increasingly in our school pupils, said Alasdair Philips, the director of the consumer group Powerwatch.

In May 2007, BBC program Panorama found that radiation levels from Wi-Fi in one school in the U.K. was up to three times the level of mobile phone mast radiation.

The readings were 600 times below the government’s safety limits, but the story triggered a public debate in the U.K. over the safety of long-term Wi-Fi use.

This prompted the HPA to announce in October 2007 that it would carry out a systematic program of research into WLANs and their use that includes measuring the exposures to Wi-Fi networks in schools.

Since 2000, UK’s health regulator has advised parents to limit the mobile phones use of their children. That early, Sir William recommended in a report that children under 15 should keep mobile phone use to a minimum and should be encouraged to text rather than call.

In Austria, a ban on Wi-Fi in schools is in the works, advocated by the Austrian Medical Association. Dr. Gerd Oberfeld, Salzburg’s head of environmental health has been quoted by BBC as saying that Wi-Fi was “dangerous” to sensitive people.

According to Professor Olle Johansson of the Karolinska Institute in Sweden, there had been recorded cases of chromosome damage from low-level radiation.