Xarelto Side Effects. Physicians may soon add a new blood-thinning drug called Xarelto (rivaroxaban) to the standard treatment for people with “acute coronary syndrome”—and in doing so lower their risk for a subsequent heart attack or stroke, or death.

Acute coronary syndrome (ACS) is an umbrella term covering the conditions of angina and a prior history of heart attack.

“It seems a good chance that the drug will soon be approved for treatment following an acute coronary syndrome,” said Dr. Simeon Margolis, on Dec. 9 in his blog, “Your Best Health After 50” published regularly by Yahoo! Health.

Dr. Margolis, a professor of both medicine and biochemistry at the Johns Hopkins School of Medicine, made this prediction following the results of a new study that found Xarelto effectively lowered the risk of subsequent heart attack, stroke or death in people who suffered ACS.

The clinical trial found that taking Xarelto, twice daily by mouth, reduced deaths from heart attacks and strokes by 9.1 percent.

The study was published last month in the New England Journal of Medicine and its findings were reported during the annual meeting of the American Heart Association in Orlando, Florida. The drug’s makers, Johnson & Johnson and Bayer Healthcare, funded the study.

According to Dr. Margolis, the new study is a critical because Xarelto works differently from current drug thinners, which prevent blood clots by addressing only one of the two causes of clotting.

In contrast, Xarelto addresses both causes of clotting, in this way increasing the chances that a person taking the drug will not suffer a recurrent heart attack, he said.

“Heart attacks and strokes occur when a blood clot blocks the blood supply to a portion of the heart or brain. This clot, called a thrombus, forms at a site where there’s been a rupture of plaque within an artery,” Dr. Margolis explained.

Blood clots result when blood platelets aggregate or when the coagulation system is set off, or when both happen, and current blood thinners like clopidogrel (Plavix) and prasugrel (Effient) or aspirin used as a blood thinner, only prevent blood clots by stopping platelet aggregation, he said.

In contrast, the new drug works by “halting one of the many events in the complex cascade of reactions that leads to the coagulation of blood,” he added.

“Using rivaroxaban after an ACS would provide the first opportunity to treat these medical emergencies with drugs that help with both platelet aggregation and coagulation factors,” Dr. Margolis said.

ACS is a common condition and is one of the most frequent reasons for hospitalization worldwide. Every year, around one million people in the United States are hospitalized for the condition.

New promise for heart patients
The new research trial covered 15,526 people who had been hospitalized for ACS. Researchers gave participants either a low dose (5 mg) or a very low dose (2.5 mg) of the new blood thinner or a placebo, on top of standard care. Both were given twice daily for an average of 13 months.

The study showed that people who received either dosage of Xarelto had a lower risk of heart attack, stroke or death than their counterparts who were given a placebo.

Among the participants taking the 2.5-mg dose, there was a 34 percent reduced risk of cardiovascular death and a 32 percent lower risk for death from any cause. Similar reductions were not seen among people taking the 5-mg dose, however. 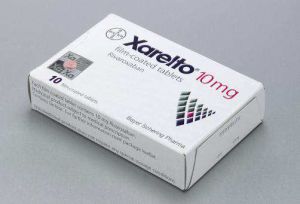 Xarelto side effects: bleeding?
But the study showed that Xarelto also increased the chances of bleeding, including bleeding in the brain—a common side effect of all blood thinners.

“One concerning outcome was that patients treated with rivaroxaban experienced a bleeding complication nearly four times more often than those taking the placebo (2.1 percent vs. 0.6 percent),” Dr. Margolis noted.

But the increase in risk was limited to nonfatal bleeds—not bleeding leading to death—the research team reported. The incidence of bleeding also dropped when patients took the smaller, rather than the larger dose of Xarelto.

Dr. Margolis asserts: “The significant increase in bleeding with rivaroxaban is more than counterbalanced by the decrease in cardiovascular deaths.”

His view was backed up by Dr. Eugene Braunwald, professor of medicine at Harvard Medical School and a cardiologist at Brigham and Women’s Hospital in Boston and co-author of the study.

According to Dr. Braunwald, the risks for bleeding must always be balanced against the benefits of any anti-clotting medication. “I’d rather have a patient walk out of a hospital with a bleed than [leave through] the morgue,” Dr. Braunwald told HealthDay News in an interview.

But doctors need to “use careful judgment in the selection of patients and length of treatment when using this drug,” Dr. Margolis said.

“Caution is needed to achieve the proper balance between bleeding risks and benefits from reducing cardiovascular events and deaths.”

Other experts not connected to the study say that before the drug is included in the standard treatment for people with ACS, studies have to be conducted to investigate the safety and efficacy of Xarelto in people who are at high risk for bleeding.

In an editorial accompanying the published study findings, Dr. Matthew T. Roe and Dr. E. Magnus Ohman of the Duke University Medical Center in Durham, North Carolina also said that there is also a need to come up with better ways of predicting which patients are at risk for drug-related bleeds.

Still, they wrote, “the results of this study indicate that rivaroxaban (Xarelto) will play an important role in the future of optimized secondary prevention.”

Secondary prevention refers to staving off a future heart attack in people who have already had a first one. In contrast, primary prevention is aimed to keep a first attach from happening.

FDA approved
Xarelto is currently approved by the U.S Food and Drug Administration to treat an abnormal heart rhythm called atrial fibrillation and to prevent the formation of blood clots after hip and knee replacement surgery.

Xarelto has a boxed warning to make clear that people using the drug should not stop using it before consulting with their doctors. Discontinuing the drug can increase the risk of stroke, the FDA said.

Xarelto is marketed in the United States by Titusville, N.J.- based Janssen Pharmaceuticals Inc.