Yasmin Side Effects: Blood Clots? Yasmin, Yaz and other birth control pills with newer formulations may increase the risk for blood clots, safety regulators in both the United States and Canada warned separately this week.

These oral contraceptives, which use a synthetic formulation of the female hormones drospirenone and ethinyl estradiol are now under the U.S. Food and Drug Administration’s renewed scrutiny, following research that suggests these pills are more likely to cause blood clots than older birth control drugs.

The FDA’s latest analysis on Yasmin side effects estimates that the risk of a blood clot with drospirenone-containing pills is 1.5-fold higher than contraceptives based on other hormones.

While the increased risk is slight, it is significant because blood clots can cause heart attacks, strokes and blockages in lungs or blood vessels—and these can be fatal.

“It’s a very small percentage of patients that develop these, but it’s such a serious side effect that I think doctors have to use a lot of caution,” Dr. Jennifer Wu, of Lenox Hill Hospital in New York, told the Associated Press.

The FDA will consider ordering new warning labels and other safety measures during a hearing on Thursday (Dec. 8).

Canada’s national health agency made this announcement after what it said was a complete safety review of Yasmin side effects and of other birth control pills containing drospirenone. Drugmakers have promoted these pills heavily for about a decade as having fewer side effects and the ability to clear up acne and ease premenstrual moodiness.

“Overall, the body of current evidence suggests that the risk of blood clots is 1.5 to 3 times higher with oral contraceptives that contain drospirenone relative to those that contain levonorgestrel, a different hormone,” Health Canada said in a release. 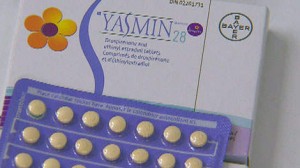 Newer drugs like Yaz are not more effective than older pills that use a combination of the female hormones estrogen and progestin to stop ovulation and help block sperm, but they are more popular because they appear to reduce bloating and mood swings, common side effects of older oral contraceptives.

Yaz, produced by Bayer AG was the best-selling birth control pill in the U.S. in 2008 and 2009. It is also marketed under the brand names Yasmin, Ocella, Gianvi, Zarah, Syeda and Loryna.

Symptoms
Symptoms of a blood clot may include persistent leg swelling, leg pain or tenderness, chest pain, or sudden shortness of breath or difficulty breathing.

Patients who think they are experiencing these symptoms should seek immediate medical attention and mention any medications they may be taking, including birth control pills.

According to Canada Health, the drug labels of Yasmin and Yaz have been updated to include information on the studies.

Birth control pills of any type should not be used by women over the age of 35 who smoke heavily (more than 15 cigarettes/day) as they are at an increased risk.

But the newer drugs appear to reduce bloating and mood swings, common side effects of older pills. Both classes of pills allow one unplanned pregnancy per year for every 100 women.

U.S. doctors interviewed by AP also say that they will not stop prescribing Yaz and other newer drugs, even if these get additional warning labels. They say the risk of blood clots with any birth control pill is still far lower than that associated with pregnancy and birth, when hormone levels and reduced blood flow increase clotting risk.

“At the end of the day I tell my patients the absolute risk is still very, very low compared to pregnancy and post-partum risk,” Dr. Rebecca Starck, of Cleveland Clinic’s Fairview Hospital told the AP. “There are still many benefits to combination birth control pills.”

The FDA also is reviewing research on clot risks associated with Johnson & Johnson’s weekly Ortho Evra patch, which uses norelgestromin, a different female hormone used by the pills under scrutiny. The patch is marketed as an “option for busy women who are looking to simplify life.”

Unlike the pills, the patch already carries warning labels about an increased risk of blood clots, but the FDA will hold a hearing on them on Friday because some studies—but not all—suggest that patch users have twice the risk of clots. The FDA will try to define that risk further using the latest data.