New skin cancer drug vemurafenib fights melanoma well, improves patient outcomes — study : Skin cancers are common and one kind is deadly. In the world, they’re among most common forms of cancers, accounting for one in three cancers diagnosed. In the United States, they’re the most common cancers.

According to the World Health Organization, over two million cases of skin cancer occur worldwide each year — including some 132,000 cases of malignant melanoma, the most fatal skin cancer.

Meanwhile, the rates of new cases continue to rise, especially among younger people, the U.S. Food and Drug Administration says. Of the three types of skin cancer, melanoma is now a rare cancer — but it’s slowly emerging as one of the most frequently diagnosed forms of cancer, the FDA warns.

About 76,250 people in the U.S. will be diagnosed with melanoma this year and about 9,200 are expected to die, according to the American Cancer Society. In the United Kingdom, this cancer affects around 60,000 people every year and kills 15,000 people. Worldwide, about 53,000 people are killed by melanoma, WHO says.

Melanoma is an aggressive skin cancer that can be particularly hard to treat when caught at an advanced stage. It’s outlook is generally poor: patients generally survive for less than a year and treatment options are few.

Right now, people with metastatic melanoma — or melanoma that’s spread — can be treated with chemotherapy, radiotherapy or immune therapies. But even with treatment, the outlook remains poor once the cancer has spread.

Leap forward for treatment
Last year, however, represented “a tremendous leap forward” for patients with late-stage or metastatic melanoma, according to FDA director Dr. Patricia Keegan.

For the first time, she said, two novel therapies that extended the lives and overall survival of people with late-stage melanoma were approved by the FDA. Dr. Keegan is the director for the Division of Oncology Products 2 of the FDA’s Office of Hematology and Oncology Products.

The two drug treatments, Yervoy (ipilimumab) from Bristol-Myers Squibb and Zelboraf (vemurafenib) from Roche and Japan’s second largest drug maker Daiichi Sankyo Co Ltd are unique because of their ability to extend a person’s life. They are also acclaimed for attacking the cancer itself.

Zelboraf targets specific melanoma patients who have a genetic mutation called the “BRAF V600” that leads to the abnormal activation of an enzyme involved in cell growth and death. About half of all melanoma patients have the genetic aberration that the drug targets, and the drug works by blocking the action of this enzyme. 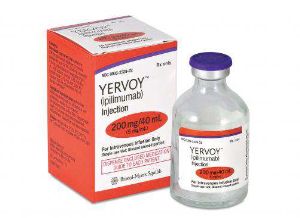 A recent study reported in the Feb. 2 issue of the New England Journal of Medicine also supports Dr. Keegan’s assessment of vemurafenib. The phase II clinical trial done in medical centers in the U.S. and Australia showed that patients who had advanced metastatic melanoma caused by the BRAF V600 mutation responded to the new drug.

Most major media outfits that reported on the study said the new drug “has been shown to nearly double average survival time.” But the UK’s national health provider warned that this was a misreading of the study’s findings.

What the researchers from the Vanderbilt University and other institutions in the U.S. and Australia found was this: About half of patients got better on the drug, and overall, patients survived for an average of nearly 16 months.

Yes, that’s double the average survival rate for patients with advanced melanoma, but again, the UK’s National Health Service warned that direct comparisons couldn’t be made.

“Previous studies have shown that patients with metastatic melanoma have an average survival rate of six to 10 months, as mentioned in some news coverage,” the NHS said.

“However, it’s difficult to compare this estimate to survival times seen in the current study, as the patient populations may be different,” the NHS said in an article on its website. “For example, it’s unclear whether these studies enrolled patients with the same genetic mutation, or how survival may be different between those with and without the mutation.”

Extends survival
Still, the new study provides new evidence that vemurafenib is effective in patients with metastatic melanoma caused by a specific mutation. The long follow up period also indicates that the drug does improve the odds of survival.

In contrast, previous statistics show that only one-fourth of all patients with metastatic melanoma survive more than a year and less than 15 percent remain alive after five years.

“We knew this drug would make the melanomas shrink in a large proportion of patients and that it worked better than chemotherapy,” said senior author Dr. Antoni Ribas, a hematology and oncology professor and researcher at University of California Los Angeles’s Jonsson Cancer Center. “We did not know that patients taking Zelboraf were living longer until now.”

Made by Genentech, a U.S. subsidiary of Swiss pharmaceutical giant Roche Holding AG, Zelboraf became the first new treatment for melanoma in 13 years when it was approved by the U.S. FDA in August 2011.

It’s a twice-daily pill that’s designed to be used alongside a companion diagnostic test that identifies which patients have the BRAF genetic mutation. The diagnostic kit is also made by Roche.

In the latest study, an intermediate phase II trial, 132 patients at 13 medical sites in the U.S. and Australia were followed. The research, supported by Roche, was published in the peer-reviewed New England Journal of Medicine.

Aside from the U.S., other places where Zelboraf and its companion diagnostic have been approved are: Switzerland, Israel, Brazil, New Zealand and Canada. In the U.S., Zelboraf is being co-promoted by Daiichi Sankyo, Inc. and Genentech. Roche promotes Zelboraf outside the U.S.