Aromasin Side Effects: Bone Loss and Fractures. The breast-cancer drug Aromasin, used in trials to prevent the cancer from developing in postmenopausal women, worsened bone loss in these women and raised their risk for fractures, a new study finds. The study was published in the Feb. 6 online edition of The Lancet Oncology.

On the other hand, the drug, also known by its chemical name exemestane, significantly reduced the recurrence of cancer—and lowered the chance that a woman with a high risk of getting breast cancer would actually end up getting it.

That, in turn, was what researchers found last year when they conducted a large study of 4,600 healthy women at risk of developing breast cancer.

That study, published in the New England Journal of Medicine, showed that women taking Aromasin had a lower risk of developing breast cancer than women taking a placebo, and that risk was 65 percent lower. It also showed that for every 94 women who took the drug for three years, one cancer was prevented.

Following up those findings in the new study, Canadian researchers examined the drug’s bone-density loss side effects more closely. Researchers, led by Dr. Angela Cheung, director of the osteoporosis program at Toronto’s University Health Network, looked at bone loss among more than 4,500 women who took part in the first trial. 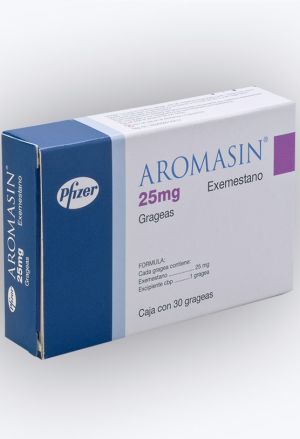 Of this number, 351 women without osteoporosis were chosen in the new analysis, 176 given exemestane and 175 given a placebo.

Researchers found that after two years, the women taking exemestane suffered about three times more loss of cortical bone than those taking a placebo. Cortical bone is the bone’s outer shell that provides most bone support, and its loss accounts for about 80 percent of fractures in older people.

The results go against earlier studies that suggested exemestane, a third-generation aromatase inhibitor, might help stimulate bone growth. The researchers in fact, had set out to prove that Aromasin might result in less bone loss than other similar drugs.

Weighing the risks and benefits. “The findings suggest that the cancer-protective effects of the drug need to be weighed against the risk of bone fracture, and that any women prescribed the drug to prevent breast cancer in the future will need to be carefully monitored for bone effects,” comments Cancer Research UK, a British charity dedicated to savings lives through research on how to prevent, diagnose and treat cancer.

“If they are at increased risk and their mother and sister had it (breast cancer), yes, I would consider taking this medication,” says lead study author Dr. Cheung. For women at high risk, the other options may be more extreme—such as having their breasts removed.

Other anti-estrogen drugs such as tamoxifen and raloxifene have side effects that are more serious—like uterine cancer and stroke, Dr. Cheung points out. She also says the blood-clotting risk of exemestane was similar to that of birth control pills.

Her views are echoed by Dr. Stephanie Bernik, chief of surgical oncology at New York City’s Lenox Hill Hospital, who comments on, but was not involved in, the study. The benefit of Aromasin outweighs the risk of bone loss for most women, she says.

“This study doesn’t mean that we should stop using these drugs,” Dr. Bernik said. “We certainly rely on aromatase inhibitors more than tamoxifen in postmenopausal women, because the survival benefit has been proven.”

But for a woman who has a family history of osteoporosis, it may not be the best choice, she adds.

“The drug did affect bone density at the hip and spine—(but) it doesn’t affect everyone; about 65 percent of women have some bone loss,” Dr. Cheung explains. But for women who are at high risk for fractures, other drugs should be considered, she says.

In a commentary published with Dr. Cheung’s study in Lancet Oncology, Jane Cauley, a University of Pittsburgh epidemiology professor surmises that previous studies may have underestimated bone loss caused by aromatase inhibitors.

Testing to use as breast-cancer prevention drug. Aromasin is a tablet given to postmenopausal women with estrogen-receptor positive early breast cancer as adjuvant treatment—or treatment given after surgery, radiation or chemotherapy.

Exemestane fights cancer by attaching to and deactivating an enzyme called aromatase, which prevents the enzyme from supplying the estrogen that allows some types of breast cancers to survive and grow.

Since 1999, Aromasin has been used to treat breast cancer and stop it from recurring. But last year’s clinical trial also found that it can be used to prevent tumors in women who are at risk of the disease.

Aromasin still isn’t approved for prevention of breast cancer, but doctors in the United States are allowed to prescribe approved drugs for other uses.

More Aromasin Side Effects. More women taking Aromasin experience the common but unwanted side effects of aromatase inhibitors, according to information from the website aromasin.com.

Women on Aromasin were almost four times as likely to develop osteoporosis compared to those taking tamoxifen, results from the AROMASIN IES study conducted by the drug maker suggest.

While taking aromasin, women were almost twice as likely to experience insomnia, headache and joint pain.

To manage Aromasin side effects, the drug maker advises:

Reduced cancer recurrence. A large, five-year study showed that postmenopausal women with ER+ early breast cancer who had been on tamoxifen for two to three years, had a reduced risk of their cancer recurring when they were switched to Aromasin, compared to those who were kept on tamoxifen for five years.

The study was funded by the drug’s manufacturer, but it looked at a large population: The study enrolled 4,724 women past menopause who were on tamoxifen. After two to three years on tamoxifen, 2,352 of the women were switched to Aromasin and 2,372 remained on tamoxifen.

When researchers followed up the women after almost three years (34.5 months), they found that women who switched to Aromasin experienced a 31 percent lower risk of breast cancer recurrence than those who stayed on tamoxifen for five years.

After almost five years (52.4 months or about 25 months post-treatment), researchers found that women who had been switched to Aromasin experienced a 24 percent lower risk of breast cancer recurrence than those who stayed on tamoxifen for five years.

New York-based Pfizer, who lost patent protection last year for the medicine in the U.S., Europe and Japan, made US$361 million in sales last year.