Avodart Side Effects and Benefits: Dutasteride vs Prostate Cancer. Unknown to many, prostate cancer — unlike most cancers — isn’t a killer disease and new findings show that a drug may help slow it’s growth, already slow to start with.

Prostate cancer is a rare cancer for men younger than 50 years old, notes the National Cancer Institute, which also points out that the actual lifetime risk of dying from prostate cancer is only 2.8 percent and most deaths occur in men who are over 75 years old.

Clearly, prostate cancer patients are not destined to die from it and it’s not even expected to shorten their lives, health experts say. In fact, for most men diagnosed with it, the cancer is growing so slowly, leading doctors to advise men not to leap into aggressive treatments, but to take a “watch and wait” approach.

But try telling that to a man diagnosed with prostate cancer.

“These are people who never sleep again until they get some therapy,” says Dr. Roth. Being men, most patients don’t feel comfortable doing nothing about their cancer. So they go ahead and act: an October 2011 U.S. Preventive Services Task Force (USPSTF) report found that about 90 percent of men diagnosed with prostate cancer choose to go through early treatment with surgery, radiation or hormone therapy.

But these radiation therapy or surgery lead to erectile dysfunction, incontinence, and difficulty urinating and controlling bowel functions—troubling and life-changing side effects that affect up to 30 percent of all men who undergo these treatments.

What’s worse, it turns out that many of these men don’t need treatment after all: a European study analyzed by the USPSTF found that overdiagnosis of prostate cancer was at a very high 50 percent rate.

The good news is that a recent Canadian study shows that, for slow-growing prostate tumors, the drug dutasteride can help make the “watch and wait” more bearable.

Dutasteride, the study shows, may help slow the growth of prostate cancer tumors.

Even better, in the final check done by researchers three years after the men were first recruited into the study, one-sixth of the 300 participants had biopsies that showed absolutely no sign of the cancer

For the study, Canadian researchers followed 300 men, 48 to 82 years old, with low risk prostate cancer being watched actively by their doctors.

Half the men were given a daily placebo, while the other half took 0.5 mg of dutasteride a day for three years, the study’s duration.

The men then underwent biopsies at 18 months and three years later to measure their disease progression. The researchers found that more cancer patients that received dutasteride improved at a higher rate than those given a placebo:

Additionally, men treated with dutasteride were more likely to have no cancer detected in their final biopsy. In 50 of the men on the dutasteride group, doctors could find no cancer, compared to 31 men in the placebo group.

The study doesn’t mean that the drug saves lives, since there were no prostate cancer-related deaths during the study, nor were there any instances of disease spread.

But at best, the study means that anxious men diagnosed with prostate cancer can take action without putting themselves at risk for impotence and incontinence—and men taking the medication did report less anxiety in questionnaires throughout the study, compared with those given placebo. 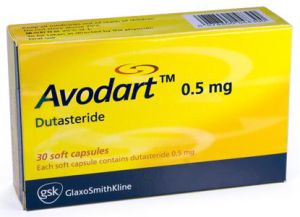 First, the study was sponsored by Avodart’s maker, GlaxoSmithKline. But the company will not be seeking a formal approval for drug’s use in low-grade prostate cancer management, study author Dr. Fleschner says.

Second, while two previous studies suggested that dutasteride and a similar drug, finasteride, could protect men from prostate cancer, the U.S. Food and Drug Administration said there were still unaddressed concerns these drugs may protect against early cancers but spur the growth of dangerous later-stage ones. The FDA declined requests to allow the drugs to be marketed for cancer prevention.

Third, Dr. Fleschner’s study had limitations: It was small, and three years is a short time to track a cancer that tends to progress over long years. It wasn’t 100 percent blinded, too. While the patients and their doctors were not told who was taking the drug and who was taking the placebo, that was easy to figure out, since dutasteride slashes levels of prostate specific antigen (P.S.A.) in half and blood tests for P.S.A. formed part of the participants’ active surveillance.

The problem, they say, may be the extensive prostate screening with P.S.A. tests, which is leading one American man in five to end up with a diagnosis of prostate cancer.

This problem was highlighted by the October 2011 findings of the USPSTF, which was convened to evaluate the controversial P.S.A. tests.

Writing in the editorial accompanying the paper, Dr. Chris Parker of the Royal Marsden, a London cancer center says the solution is to “try to avoid not only treating but also diagnosing low-risk disease.”

In the meantime, he writes, “dutasteride cannot be recommended as an adjunct to active surveillance.”
His views are shared by Dr. Peter Albertsen, a prostate cancer expert at the University of Connecticut.
Dr. Albertsen says he is happy about the new findings but says his enthusiasm for the drug is tempered by worries that dutasteride might fuel the growth of dangerous and deadly prostate cancers.

But the expert, who is not associated with the new study, admits that dutasteride’s effect on P.S.A. levels could be helpful. It might make men taking the drug less likely to worry that their cancer is growing and have biopsies to check, he says.

It is worth noting that some of the above Avodart side effects have continued in some men even after stopping treatment.

Furthermore, rare allergic reactions to Avodart have been reported. Go to your doctor ASAP if you experience any of these allergic Avodart side effects: rash, itching/swelling (especially of the face/tongue/throat), severe dizziness, trouble breathing.

There may be other Avodart side effects aside from the ones mentioned above. Call your doctor if you have any unusual problems while taking this medication.

Some dos and don’ts while taking Avodart or dutasteride:

• Do allow your doctor monitor you carefully for Avodart side effects; he may also need to change the doses of your medications.
• Do keep all appointments with your doctor and the laboratory. Your doctor will order certain lab tests to check your body’s response to dutasteride.
• Don’t donate blood while you are taking dutasteride and for six months after you stop taking this medication.
• Do talk to your doctor about drinking grapefruit juice while taking this medicine.
• Do take a missed dose as soon as you remember it. But if it is almost time for the next dose, skip the missed dose and continue your regular dosing schedule.
• Don’t take a double dose to make up for a missed one.
• Do keep this medication in the container it came in, tightly closed, and out of reach of children.
• Do store it at room temperature and away from excess heat and moisture (not in the bathroom).
• Do throw away any medication that is outdated or no longer needed.
• Do tell your doctor and lab personnel that you are taking dutasteride when taking lab tests.

Avodart Side Effects and Benefits: Dutasteride vs Prostate Cancer. Posted 7 February 2012. Updated 5 May 2017.