Lap Band Side Effects, Misleading Ads, and Other Stuff: The United States Food and Drug Administration has asked eight California surgical centers to correct their “misleading” ads for the Lap-Band weight-loss device, the agency announced. 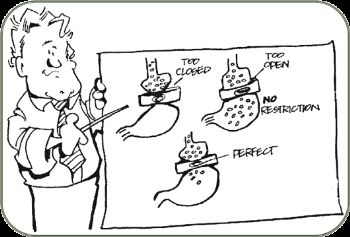 The FDA said it sent letters to the eight surgical clinics, warning them that their advertising for the Lap-Band failed to provide required risk information, including warnings, precautions, possible side effects and contraindications.

A marketing firm, 1-800-GET-THIN, also got a warning letter, the FDA said.

The agency also warned the companies that if they did not change the advertising and promotion strategies to address these concerns, it would take further action, which may involve seizing products or imposing civil money penalties.

The Lap-Band is a gastric band, a medical device implanted surgically around the top of the stomach to produce weight loss in obese adults. It is only one of many forms of obesity or bariatric surgery.

Lap bands and bariatric surgery have become popular over the past three decades, as obesity rates began to rise.

“The FDA takes seriously its responsibility to protect consumers from products promoted without adequate warnings,” Steve Silverman, director of the Office of Compliance in the FDA’s Center for Devices and Radiological Health, said in a statement.

In its letter, the FDA also said advertising inserts used by the eight surgical centers and the marketing firm to promote the Lap-Band procedure had risk warnings printed in type size too small to be read by consumers.

Lap Band Side Effects and Risks
Gastric bands helps reduce weight in people who have them inserted by effectively restricting the stomach—by dividing the stomach into a smaller stomach and an isolated pouch on top.

With a smaller stomach, a person’s feels full on smaller amounts of food, thus decreasing the overall amount of food a person eats for as long as he or she is outfitted with a gastric band.

But one major gastric lap band side effects is that the size of the isolated stomach pouch can change over time. The pouch may enlarge if the band slips, or if the pouch wall stretches. The band may also erode into the stomach.

But health experts note that the major risks linked to gastric banding are significantly less than other forms of bariatric surgery.

The banding procedure doesn’t involve opening the gastric cavity and there’s no cutting, stapling or bypassing, so most of the side effects and the potential for infection linked to other obesity surgeries are avoided.

A major advantage of the gastric band is that it can also be removed or replaced if any of these complications become serious or life threatening.

In morbidly obese persons, the lap band may also be considered less risky than not losing weight.
A person is morbidly obese when he or she generally weighs at least twice or 100 pounds more than his or her ideal weight or has a BMI of 40.

Worldwide, obesity is emerging as a health epidemic today. According to the Centers for Disease Control and Prevention, obesity is rapidly spreading across all regions and demographic groups.

In the past decade, the prevalence of obesity has increased more than 60 percent. A quarter of the U.S. population is obese and another 97 million Americans are overweight or at risk of becoming obese.

For related stories, check out the Side Effects of Slim Xtreme Herbal Capsule which was recently banned by the FDA.